Ex-Obama Pastor: 'Obama Threw Me Under the Bus' 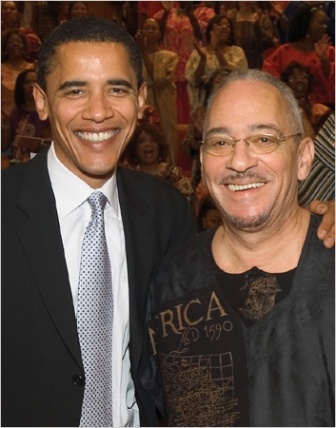 NEW YORK (AP) -- The Rev. Jeremiah Wright, Barack Obama's controversial former pastor, said in a letter obtained by The Associated Press that he is "toxic" to the Obama administration and that the president "threw me under the bus."
In his strongest language to date about the administration's 2-year-old rift with the Chicago pastor, Wright told a group raising money for African relief that his pleas to release frozen funds for use in earthquake-ravaged Haiti would likely be ignored.
``No one in the Obama administration will respond to me, listen to me, talk to me or read anything that I write to them. I am 'toxic' in terms of the Obama administration,'' Wright wrote the president of Africa 6000 International earlier this year.
``I am 'radioactive,' Sir. When Obama threw me under the bus, he threw me under the bus literally!'' he wrote. ``Any advice that I offer is going to be taken as something to be avoided. Please understand that!''
The White House didn't respond to requests for comment Monday about Wright's remarks. Several phone messages left by the AP for Wright at the Trinity United Church of Christ, where he is listed as a pastor emeritus, were not returned. Wright's spokeswoman, his daughter Jeri Wright, did not immediately comment on the substance of the letter.
Then-Sen. Obama cut ties with Wright when his more incendiary remarks became an Internet sensation in the spring of 2008. At a National Press Club appearance in April 2008, he claimed the U.S. government could plant AIDS in the Black community, praised Nation of Islam leader Louis Farrakhan and suggested Obama was putting his pastor at arm's length for political purposes while privately agreeing with him.
Obama denounced Wright as ``divisive and destructive'' and later cut ties to the pastor altogether and left Wright's church.
The letter was sent Feb. 18 to Joseph Prischak, the president of Africa 6000 International in Erie, Pa. Wright subsequently agreed to write a letter to Treasury Secretary Timothy Geithner on the group's behalf to try to get access to millions of dollars.
Wright's original letter ranting against Obama's treatment of him surfaced in an appeal filed by federal inmate Arthur Morrison, boxing great Muhammad Ali's one-time manager, who was convicted of making phone threats.
Charles Lofton, Wright's executive assistant, told The Associated Press that he faxed a copy of the letter to Morrison's attorney as requested. A copy of the faxed letter signed by Wright showed that it was sent from the Trinity United Church of Christ in Chicago on March 31 to the fax number for James Goodwin's law office in Tulsa, Okla.
Prischak, of Africa 6000 International, is a business partner of Morrison, who has been imprisoned for nearly 18 years after he was convicted of 14 charges, including wire fraud and making phone threats between 1989 to 1992.
Prischak told Wright in a Feb. 11 letter that he was seeking the clergyman's help in reaching out to the U.S. Treasury Department. He said that Uday Hussein, the son of Saddam Hussein, had entrusted 87 million British pounds in 1990 to Morrison and Ali to buy pharmaceuticals, milk and food for the children of Iraq.
Prischak said the money was never spent because Morrison was imprisoned. He sought Wright's help in lobbying U.S. authorities to permit 25 million British pounds in interest from the money held in an overseas account to be allowed to be sent to faith-based groups for the children of Haiti.