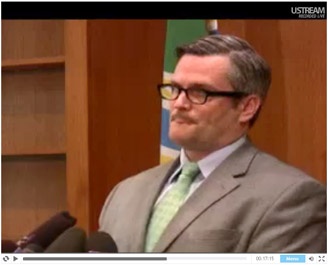 Portland Mayor Sam Adams today surprised Portland by firing Police Chief Rosie Sizer, taking control of the police bureau from Commissioner Dan Saltzman and assuming its lead, both effective immediately. Portland Police Commander Mike Reese will take over as interim chief.
The move comes after months of attacks between the community and the police bureau over accountability issues, during which Adams weathered blunt criticism for what some saw as a lack of leadership.

He convened a press conference at around noon today to deliver his remarks, which were delivered to a select group of news organizations that did not include any members of Portland's ethnic media.
The press conference was streamed live by The Oregonian, and can be viewed here http://www.ustream.tv/recorded/6864243 .
"As mayor I will lead the men and women of the Portland Police Bureau into a new and different direction," he said.
"Make no mistake, the 1,200 men and women who serve and protect us everyday have the potential to make the best police force in the country," Adams said.
"Despite the extraordinary efforts of the courageous few who carry the badge, the relationship between the citizens of Portland and their police officers is not what it needs to be.
"Too many Portlanders express concern about their own safety, not just because of crime, but rather the fear of the police force.
"Both the public and the force are extremely frustrated with this situation. There is an obvious communications problem, and above all it is a leader's responsibility to ensure all the parties connect."