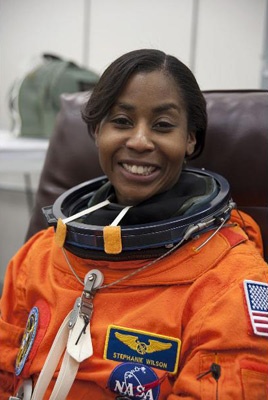 CAPE CANAVERAL, Fla. (AP) -- Discovery's space station visit took a sudden pop-cultural turn Thursday when one of the four record-breaking female astronauts went on talk radio from orbit to chat about her career, iPod selections and even her hairdo.

Stephanie Wilson was a good sport as she answered questions from nationally syndicated talk show host Tom Joyner, whose shows are broadcast on www.blackamericaweb.com. He noted there are more women in orbit right now than ever before, then asked: ``Did you get your hair done before you went up in space?''
Wilson threw back her head and laughed.
``Of course, I always try to represent NASA as best I can,'' she said. ``So hopefully, I'm looking pretty good.''
Wilson, among only a handful of Black women to fly in space, turned serious when answering Joyner's questions about how she got into ``the business of space shuttling'' and how parents can encourage their children to follow her example.
The 43-year-old engineer said it was important to study hard and be exposed to as many opportunities as possible, in order to ``dream big dreams.'' She's one of three women who flew up on Discovery and joined one already at the International Space Station, making for the biggest female crowd ever to circle the planet.
Joyner, in Orlando as part of a 2010 census tour, asked Wilson if she filled out her census form before she rocketed into space Monday. She did, ``but I did have to file an extension on my taxes.'' As for her iPod selections aboard the shuttle-station complex: peppy tunes for exercising and spiritual music for relaxing.
Earlier Thursday, Wilson helped attach a compartment full of newly delivered goods to the space station, enough to keep the lab complex running for years to come. She used a robot arm to hoist the 13-ton cargo carrier from Discovery's payload bay.
And for the second day in a row, huge reams of shuttle images streamed from the space station down to Mission Control. The files contained 3-D laser shots of Discovery, hobbled by a broken antenna and unable to transmit or receive large packages of information.
The shuttle astronauts had to wait until they got to the space station Wednesday before they could send down the wing and nose images they gathered Tuesday. NASA needs to review each image -- searching for any launch damage to the heat shields -- before committing Discovery to re-entry on April 18.
It took considerably longer than expected to get all the files down. The files are huge -- about 40 gigabytes altogether, considerably bigger than what usually flows from the space station. Flight controllers, with help from the astronauts, had to work around unexpected software features that slowed down the process, flight director Courtenay McMillan said.
There is no reason to suspect Discovery suffered serious damage during Monday's liftoff. But ever since the 2003 Columbia tragedy, a shuttle's wings and nose must be surveyed at least twice on every mission, using a 100-foot laser-tipped boom.
The second survey normally occurs right after undocking. But because of the antenna failure, the inspection will be conducted while Discovery is still docked to the space station, to take advantage of the space station's relay system.
McMillan said it's too soon to say whether Discovery will have to spend an extra day at the orbiting outpost. Another option would be to cut out some originally planned work in order to squeeze in the survey, and have the shuttle leave on time on April 16.
``Everything's on the table at this point,'' McMillan said.
Three spacewalks are planned to replace a depleted ammonia tank that is part of the space station's cooling system.