Civil Rights will be front and center of national education policy in 2010, U.S. Education Secretary Arne Duncan announced March 8 at a civil rights commemoration of "Bloody Sunday" in Selma, Alabama.
Which school districts will be under the microscope are yet to be announced, but school administrators in Portland have said inequities in high schools may breach the civil rights of African American and other minority students. 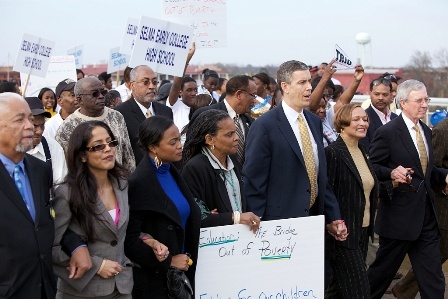 Portland administrators point to disparities in course offerings among schools, and a persistent achievement gap that leaves minority and low-income students with lower graduation rates and other disparities in access to education and in results. That's one of the reasons they say are behind big changes for Portland's high schools.  Education Secretary Duncan plans to address the disparities nationally.

"Dr. King would have been angered to see that we all too often under-invest in disadvantaged students; that they still have fewer opportunities to take rigorous college-prep courses in high school; that too many black, and brown, and low-income children are still languishing in aging facilities and high schools that are little more than dropout factories," Duncan said. "He would have been downhearted that students with disabilities still do not get the educational support they need--and he would have been dismayed to learn of schools that seem to suspend and discipline only young African-American boys."

The Department of Education is launching more than 40 civil rights compliance reviews in school districts in 33 states before September 2010.

Assistant Education Secretary Russlyn Ali told reporters in a conference call, reviews will look at the results of what states are doing to ensure equality for minorities, disabled students, girls and boys.

"You can expect to see our compliance reviews be a little broader …so we will be looking at things like access to college and career-ready curricula, not just AP courses for example, but the full sequence of courses students need to have access to in order to succeed in this new global and competitive and knowledge-based economy,"

The first review, announced March 10, will look at how well Los Angeles schools serve students who are English language learners.


The Office of Civil Rights will step up enforcement efforts this year, Duncan said, launching compliance reviews to enforce the law.

Duncan pointed to statistics that show 12 percent of our high schools, or 2,000 high schools, produce half of the dropouts in the country, three-fourths of them African-American and Latino students.

"This is economically unsustainable and morally unacceptable," he said. He also noted disparities in disciplining minority students, and in access to higher education for poor students, no matter how well they do in school.

See the Skanner's report on plans for high school redesign.