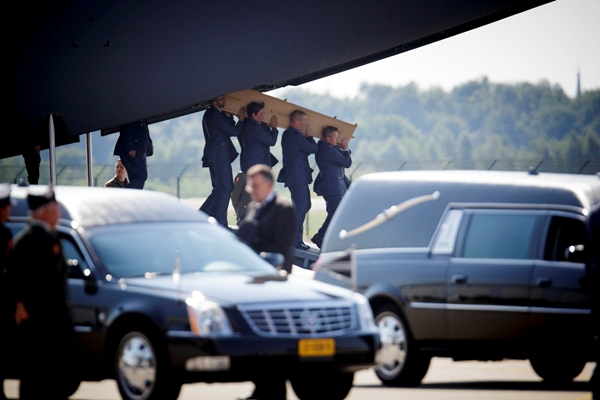 Investigators are frustrated that the site of the crash was left unsecured. They are confident that the plane was shot down, but the role Russia played remains unclear

Pallbearers carry a coffin out of a military transport plane during a ceremony to mark the return of the first bodies, of passengers and crew killed in the downing of Malaysia Airlines Flight 17, from Ukraine at Eindhoven military air base, Netherlands, Wednesday, July 23, 2014. After being removed from the planes, the bodies were taken in a convoy of hearses to a military barracks in the central city of Hilversum, where forensic experts will begin the painstaking task of identifying the bodies and returning them to their loved ones. (AP Photo/Phil Nijhuis)

EINDHOVEN, Netherlands (AP) — Victims of the Malaysian jetliner shot down over Ukraine returned at last Wednesday to Dutch soil in 40 wooden coffins, solemnly and gently carried to 40 identical hearses, flags at half-staff flapping in the wind.

The carefully choreographed, nearly silent ceremony contrasted sharply with the boom of shells and shattered glass around eastern Ukraine as pro-Russian rebels fought Wednesday to hang onto territory — and shot down two Ukrainian fighter jets. The bold new attack showed they are not shying away from shooting at the skies despite international outrage and grief at the downing of Malaysia Airlines Flight 17.

Even though they are still unidentified, the corpses that arrived in Eindhoven were embraced by a nation unmoored by the loss of so many people caught in someone else's faraway war.

Boys going to visit their grandparents, a flight attendant in a hurry to get home, a bouncer heading to see his sweetheart were among the 298 victims of Malaysia Airlines Flight 17, whose downing last week has intensified anger at the pro-Russian rebels suspected of bringing the plane down.

Nearly a week later, international investigators still don't have unfettered access to the area, some remains are unrecovered, and armed men roam, defying their government.

Investigators in a lab in southern England began studying the plane's black box recorders Wednesday in hopes of finding clues to what happened. The Dutch Safety Board, which has taken control of the investigation, said the voice recorder suffered damage but showed no sign of manipulation, and its recordings were intact. Specialists will start studying the flight data recorder Thursday.

Families of passengers moved to a new stage of grieving as the corpses started arriving in the Netherlands, the country that bore the heaviest death toll in the crash.

The families had spent days agonizing in wait while body parts decayed in sweltering Ukrainian fields before being gradually shifted by truck, train and plane to the Netherlands.

"If I have to wait five months for identification, I can do it," said Silene Fredriksz-Hoogzand, whose son, Bryce, and his girlfriend Daisy Oehlers died in the crash. "Waiting while the bodies were in the field and in the train was a nightmare." 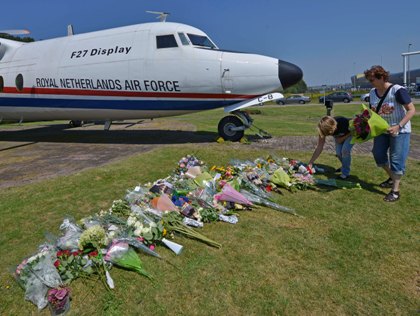 PHOTO: People lay flowers in front of a plane prior a ceremony to mark the return of the first bodies, of passengers and crew killed in the downing of Malaysia Airlines Flight 17, from Ukraine at Eindhoven military air base, Wednesday, July 23, 2014. After being removed from the planes, the bodies are to be taken in a convoy of hearses to a military barracks in the central city of Hilversum, where forensic experts will begin the painstaking task of identifying the bodies and returning them to their loved ones. (AP Photo/Martin Meissner)

On a day of national mourning, flags flew at half-staff on Dutch government buildings and family homes around this nation of 17 million.

Church bells rang out around the country as the planes taxied to a standstill. King Willem-Alexander clasped his wife Queen Maxima's hand as the couple grimly watched teams carry the coffins slowly from the planes to a fleet of waiting hearses.

Almost the only sound was of boots marching across the ground and flags flapping in the wind.

Then as the last hearses drove away, applause briefly broke out.

From the airport, they were driven under military police escort to the central city of Hilversum where forensic experts were waiting at a military barracks to carry out the painstaking task of identifying the remains. Dutch Prime Minister Mark Rutte says many bodies could be identified quickly and returned to their loved ones, but some families may have to wait weeks for a positive identification.

The rebels, undeterred, fought Wednesday to hold onto territory in eastern Ukraine and said they attacked two Ukrainian Air Force jets in the same area where the passenger plane fell.

Ukraine's Defense Ministry said the Su-25s were shot about 30 kilometers (20 miles) south of the wreckage from the Malaysian jet. The separatist group Donetsk People's Republic said on its website that one of the pilots was killed and another was being sought by rebel fighters.

The attack revived questions about the rebels' weapons capabilities — and how much support and training they are getting from Russia. The U.S. accuses Russia of backing the separatists and fueling Ukraine's conflict, which has brought Russia's relations with the West and key trading partners in Europe to a two-decade low.

While the insurgents deny having missiles capable of hitting a jetliner at cruising altitude, rebel leader Alexander Borodai has said that separatist fighters do have Strela-10M ground-to-air missiles, which are capable of hitting targets up to an altitude of 3,500 meters (11,500 feet). They have shoulder-fired missiles with a smaller range.

The rebels also say they shot down an Antonov-26 early last week with a shoulder-fired anti-aircraft missile. The Ukrainian government is hinting that the Antonov was flying too high for the rebels to hit it, suggesting Russian involvement.

Rebel leader Pavel Gubarev wrote on his Facebook page that 30 rebels were injured and his men retreated Wednesday from the villages of Chervona Zorya and Kozhevnya, on the Russian border about 45 kilometers (30 miles) from the sunflower fields where the Malaysia Airlines plane fell.

The battles are complicating the investigation into the passenger jet crash.

Ukraine and Western nations are pressing the pro-Russian rebels who control the crash site to allow an unfettered investigation, something Russian President Vladimir Putin said he would use his influence to achieve. Though confident that a missile brought down the passenger jet, U.S. officials say Russia's role remains unclear. Russia denies involvement.

The Dutch Safety Board, which is leading an international team of 24 investigators, said unhindered access to the crash site was critical.

Spokesman Tjibbe Joustra told The Associated Press in a telephone interview that around 25 investigators are in Kiev analyzing information including photos, satellite images and radar information, but have not yet gained access to the crash site.

Independent military analysts said the size, spread, shape and number of shrapnel impacts visible in an AP photograph of a piece of the wreckage all point to a missile system like the SA-11 Buk.

U.S. analysts have also concluded that an SA-11 was the likely weapon.

Konrad Muzyka, Europe and CIS armed forces analyst at IHS Jane's, said the high number of shrapnel holes in the debris meant that only a fragmentary warhead like the SA-11 could have been used. The fact the shrapnel holes are folded inwards confirmed that the explosion came from outside the plane, he added.

Justin Bronk, military sciences research analyst at the Royal United Services Institute, said "the size of shrapnel holes is fairly broad, in keeping with what you would expect from a large missile like the SA-11."

Residents in the rebel-held city of Donetsk swept broken glass Wednesday and tried to repair apartments damaged from shelling in recent days.

"The solution I see is to stop shooting. Then Europe and Russia should step in to help start talks," said resident Alexander Litvinkenko. "Nothing will be resolved by force."

Chernov contributed from Snizhne, Ukraine. Mike Corder in The Hague, Netherlands, and Jona Kallgren in Kharkiv, Ukraine, contributed to this report.