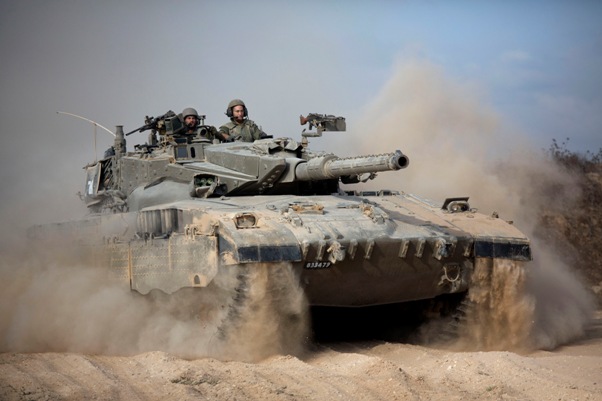 The assault opens a new, potentially extended and bloodier stage in the conflict following a 10-day Israeli campaign of more than 2,000 airstrikes against Gaza that had failed to halt militants rocket fire on Israeli cities. Prime Minister Benjamin Netanyahu said he told his military to prepare for a possible "significant" expansion of the operation.

The government said its goal is to stop rocket attacks, destroy the network of Hamas tunnels into Israel and weaken Hamas militarily. But there are calls from hard-liners in Israel to completely crush Hamas and drive it from power in Gaza. That could mean a longer operation with the danger of mounting casualties in a conflict that has already seen more than 274 Palestinians killed in Gaza, around a fifth of them children.

Israel had been reticent about a ground offensive for fear of endangering its own soldiers and drawing international condemnation over mounting Palestinian civilian deaths.

But after an attempt by Hamas to infiltrate Israel on Thursday — when 13 armed militants sneaked through a tunnel from Gaza, only to be killed by an airstrike as they emerged inside Israel — Netanyahu gave the order that evening for thousands of troops on standby to enter Gaza.

"We chose to begin this operation after the other options were exhausted and with the understanding that without the operation the price we will pay can be very high," he said Friday before a special Cabinet meeting in Tel Aviv.

He said he had instructed the military to "be ready for the possibility of a significant expansion of the ground operation."

Israel saw its first military death of the conflict in the early hours of the ground assault. The circumstances behind the death of Staff Sgt. Eitan Barak, 20, were not made clear: Hamas's military wing said it ambushed Israeli units in the northern town of Beit Lahiya, but Israeli media said Barak was likely killed by friendly fire. An Israeli civilian died from mortar fire earlier in the week, and several have been wounded.

The Israeli military said it killed nearly 20 militants in exchanges of fire. Gaza health officials said 25 Palestinians have been killed since the ground operation began, including three teenage siblings from the Abu Musallam family who were killed when a tank shell hit their home. At the morgue, one of the victims' faces was blackened by soot and he and his siblings were each wrapped in a white burial shroud.

Their father, Ismail, said the three were sleeping when the shell struck, and that he had to dig them out from under the rubble.

Israel says it is going to great lengths to avoid civilian casualties and blames them on Hamas, accusing it of firing from within residential neighborhoods and using its civilians as "human shields."

The streets of Gaza City were largely deserted, though some roadside vegetable vendors remained open. The sound of steady shelling could be heard across Gaza as Israel continued to strike targets from the air, and buildings shook as missiles hit.

"The ground offensive does not scare us and we pledge to drown the occupation army in Gaza mud," Hamas spokesman Sami Abu Zuhri said in a statement.

Hamas has survived Israeli offensives in the past, including a major three-week ground operation in January 2009 from which it emerged militarily weaker, but in each case it recovered. The group controls an arsenal of thousands of rockets, some long range and powerful, and it has built a system of underground bunkers.

But Hamas is weaker now than it was during the previous two offensives — from 2008-9 and 2012 — with little international or even regional support, with its main allies Turkey and Qatar largely sidelined by others in the region. Protests against the offensive took place Friday in Jordan, Turkey and the West Bank.

Netanyahu spoke with President Barack Obama Friday evening, his office said. Netanyahu blamed Hamas for the fighting and said the Islamic militant group that rules Gaza is using civilians as "human shields." He pointed to the rockets found at a U.N. school in Gaza on Thursday as an example.

The U.N. refugee agency for Palestinians, UNRWA, said that during a routine check it discovered about 20 rockets hidden in one of its vacant Gaza schools and called on militants to respect the "sanctity and integrity" of U.N. property.

French Foreign Minister Laurent Fabius was travelling Friday to Egypt, Jordan and Israel as part of a diplomatic push to stop the fighting. He said in a statement that he wants a cease-fire and lasting truce "that responds to Israel's security needs and Palestinian economic needs."

Egypt supports a cease-fire, but not Hamas or its conditions, which include a lifting to the siege of Gaza and completely open borders into the Sinai — where Egypt is already fighting Islamic extremists.

Israeli defense officials said soldiers faced little resistance during the first night of the ground operation. The military said paratroopers had already uncovered eight tunnel access points across the Gaza Strip and engaged in several gun battles with forces that ambushed them.

Forces are expected to spend a day or two staking ground within 3 kilometers (2 miles) of the border. Then, they are expected to move to the second phase, which is to destroy tunnels, an operation that could take up to two weeks.

Tanks, infantry and engineering forces were operating inside the coastal strip. The military said it targeted rocket launchers, tunnels and more than 100 other targets, and that a number of soldiers were wounded.

Israeli public opinion appears to strongly support the offensive after days of rocket fire from Gaza and years of southern Israeli residents living under the threat. Gaza militants have fired more than 1,500 rockets at Israel over the past 11 days. Rocket fire continued across Israel Friday, with one exploding near a kindergarten south of Tel Aviv, lightly wounding a woman nearby, the military said.

Prior to the Israeli Cabinet meeting, several ministers said they expected a prolonged offensive.

"We need to go in and finish the job. We need to eliminate every terrorist. They have no immunity." said Uri Ariel, a Cabinet minister from the hardline Jewish Home party.