Video: Historic Meeting Heralds a Breakthrough in Iran's Relationship with the West 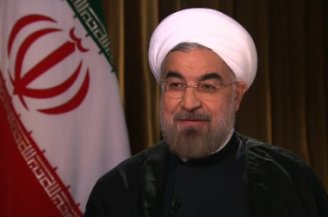 Western leaders have said Iran seems to sound different under the leadership of newly elected President Hassan Rouhani. Friday, it was Rouhani's turn to return the compliment, saying European Union officials and U.S. President Barack Obama sound "different compared to the past."

"I view that as a positive step in the settlement of differences between Iran and the West," he told reporters Friday.

Rouhani said he was heartened by Thursday's meeting between Secretary of State John Kerry and Iranian Foreign Minister Mohammad Javad Zarif as part of a meeting between Iran and the six countries trying to tackle international concern over the Middle Eastern country's nuclear program.

It was the first face-to-face meeting between such high-level officials of the two countries in more than 30 years.

Rouhani had a chance to at least shake hands with Obama while at the United Nations General Assembly in New York. But he told reporters Friday that there wasn't enough time to plan such a meeting.