LOS ANGELES (CNN) -- Two sheriff's deputies have been wounded in a shootout with a suspect believed to be renegade ex-Los Angeles police officer Christopher Jordan Dorner, a high-ranking law official with knowledge of the investigation said Tuesday.

Dorner had stolen a vehicle from a house in the Big Bear area when he came upon a police roadblock, the source said. Dorner opened fire on the deputies and later was pinned down, the source said.

Dorner is accused of killing one police officer and wounding two others, as well as killing the daughter of his police union representative and her fiancé.

The violent spree, authorities say, was part of Dorner's campaign of vigilante justice for what he believes was his unfair termination.

Los Angeles police spokesman Lt. Andy Neiman said Tuesday that the department had received more than 1,000 tips on Dorner's whereabouts. Some of the calls have come from Dorner's acquaintances or people who think they have spotted the fugitive.

The pace of tips being given to investigators increased by 400% after the city of Los Angeles put up a $1 million reward on Sunday for information leading to Dorner's arrest and conviction, Neiman said. 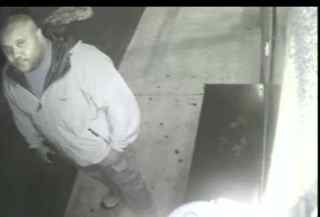 The search for the 270-pound, 6-foot Dorner has focused on the Big Bear Lake area, where authorities say his burning truck was discovered last week after he allegedly started carrying out his threats to kill police and their family members.

Over the past two weeks, the search, considered one of the largest in the history of Southern California, has taken authorities from Orange County to the border of Mexico and from Los Angeles to Big Bear Lake.

"Until we can confirm that he's either there or he's not there, this investigation has to stick with what we know and what we know is that we found evidence that he was there," Neiman said.

While the LAPD spokesman told reporters he was "not ready to confirm" that a man seen in security camera video from a Southern California sporting goods store was Dorner, the Los Angeles Times quoted unnamed law enforcement sources saying it was him.

The video, published Monday by the celebrity news website TMZ.com, shows the man carrying what appears to be scuba equipment at the Sports Chalet store in Torrance, California, on February 1, two days before the killings of Monica Quan, the daughter of the police union rep, and her fiancé, Keith Lawrence.

A "no bail" arrest warrant was issued for Dorner after the Riverside County district attorney filed a murder charge Monday against him in the killing of Riverside Police Officer Michael Crain.

"That allows him to be apprehended anywhere within California, out of state or out of the country," District Attorney Paul Zellerbach told reporters Monday.

The murder charge is accompanied by two "special circumstances," including killing a police officer on duty and firing a weapon from a vehicle.

Dorner was also charged with the attempted murder of three other police officers, including another Riverside officer who was wounded when Crain was killed. That officer, whose name has not been released, is in a lot of pain and faces "many surgeries," Riverside Police Chief Sergio Diaz said.

Dorner is also accused of opening fire on two LAPD police officers, wounding one, in the suburb of Corona.

There has been speculation, based in part on an arrest warrant affidavit filed last week, that Dorner could have crossed state lines into Nevada or made his way to Mexico.

Federal authorities, meanwhile, were asking anyone across the country with information about Dorner or his whereabouts to contact their local FBI or U.S. Marshals Service.

Over the weekend, LAPD said it was reopening the case that resulted in his termination.

Dorner accused his training officer of kicking a mentally ill man during an arrest in 2007. The LAPD ruled the complaint unfounded and kicked Dorner off the force for filing a false complaint.

Dorner challenged his firing in court and lost.

In a manifesto released last week, Dorner blamed racism and corruption in the LAPD for his termination and vowed to wage "unconventional and asymmetrical warfare" against LAPD officers and their families. He called it a "last resort" to clear his name and strike back at a department he says mistreated him.

LAPD Chief Charlie Beck had a different term for it Sunday.

"This is an act -- and make no mistake about it -- of domestic terrorism," he told reporters Sunday. "This is a man who has targeted those that we entrust to protect the public. His actions cannot go unanswered."

Authorities say Dorner began making good on his threats on February 3 when he allegedly killed Quan, 27, and Lawrence in an Irvine parking lot, south of Los Angeles.

Randal Quan represented Dorner during the disciplinary hearing that resulted in his firing. The officer was among dozens named in the manifesto.

The retired officer told investigators he received a call from someone identifying himself as Dorner who told him he "should have done a better job of protecting his daughter," according to a federal arrest warrant affidavit.

Investigators traced the call to Vancouver, Washington, but based on the timing of other sightings, they don't believe Dorner was in Vancouver at the time, the affidavit states.

Roughly 20 minutes later, Dorner allegedly fired on two officers in the nearby city of Riverside, killing Crain and wounding another.

Since then, the LAPD has provided security and surveillance details for more than 50 police officers and their families -- many of whom were named in the manifesto.

Additionally, the LAPD is no longer releasing the police chief's schedule to the public or the media.

'Ghosts' of the LAPD's past

It was Dorner's allegations of racism at the LAPD that led Beck over the weekend to reopen the investigation into his claims.

Beck said he was not doing it to "appease a murderer" but out of concern that Dorner's allegations will resurrect a painful part of the department's history.

For years, the LAPD was dogged by complaints of racism and corruption. In 1965 and 1992, the city was rocked by racial riots that were sparked, in part, by claims of police racism and brutality.

"I hear the same things you hear: The ghosts of the past of the Los Angeles Police Department," Beck said Sunday. "I hear that people think maybe there is something to what he says, and I want to put that to rest."

Despite numerous reviews of Dorner's case, he said it has "never been reviewed by me."