The Uss Guardian Will Have to Be Lifted Off Philippine Reef 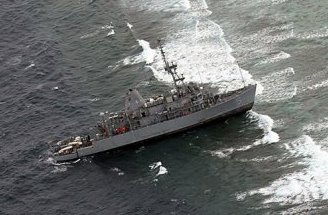 The U.S Navy minesweeper that grounded on a Philippine reef last week has taken on water and sustained too much damage to be towed off, the Navy says.

"It's got hull penetrations in several places, and there is a significant amount of water inside the ship," Rear Adm. Tom Carney said at a briefing Thursday.

The Navy said it will use ship-borne cranes and heavy-lift vessels to lift the minesweeper, the USS Guardian, off the Tubbataha Reef.

"As the crane ships arrive, we will take items off the Guardian to lighten the weight of the ship so we are able to remove it from the reef," Carney said. "The option that we had hoped to tow the ship off the reef is not available. The ship is too badly damaged."

The Guardian would be removed from the area on a barge or other ship, Carney said.

"The ship cannot move on its own, and it is not operational," he said.

The 224-foot-long,1,312-ton ship was on its way from Subic Bay, Philippines, to its next port call in Indonesia when it struck the reef, about 80 miles (130 kilometers) east-southeast of Palawan Island in the Sulu Sea, on January 17.

Initial efforts to free the Avenger-class mine countermeasures ship at high tide were unsuccessful. Its crew of 79 was evacuated to other vessels, and the ship was battered by waves that pushed it farther onto the reef.

Carney said the Guardian now rests about 20 to 30 meters (22 to 33 yards) from the edge of the reef. Originally, only its bow was on the reef, but waves have now pushed the entire ship onto it.

Lt. Cmdr. James Stockman, a Navy spokesman in Manila, said Friday that the heavy-lift vessels would arrive at the grounding site in about a week. The guided missile destroyer USS Mustin, the oceanographic survey ship USNS Bowditch and the rescue and salvage ship USNS Salvor, as well as tugboats and Philippine navy and coast guard vessels, are on station, he said in an e-mail to CNN.

It could take two weeks to remove the Guardian from the reef, Carney said.

"We are committed to moving the ship from the reef as soon as possible. ... That is the focus of all our efforts," he said.

The admiral said the ships on station have begun efforts to remove about 15,000 gallons of fuel from the Guardian. He said there have been no signs of oil or fuel leaking into the waters above the reef, which is a Philippine national park and UNESCO World Heritage Site.

The reef is home to a vast array of sea, air and land creatures, as well as sizable lagoons and two coral islands. About 500 species of fish and 350 species of coral can be found there, as can whales, dolphins, sharks, turtles and one of the last surviving colonies of breeding seabirds in the region, according to UNESCO.

Philippine officials said this week that the Philippines would seek compensation for damage to the reef. About 1,000 square meters (about 10,760 square feet) of the reef have been damaged.

He said the salvage operation must ensure that the reef sustains no further damage.

As to how the ship got stuck on the reef in the first place, Stockman said the Navy is looking at a number of factors.

He said the U.S. National Geospatial-Intelligence Agency, which prepares the digital navigation charts used by the Navy, has reported the location of the reef was misplaced on a chart by nine miles.

"The U.S. Navy investigation will review what charts Guardian was using. While this erroneous navigation chart data is important information, no one should jump to conclusions," Stockman said. "It is critical that the U.S. Navy conduct a comprehensive investigation that assesses all the facts and circumstances surrounding the Guardian grounding."