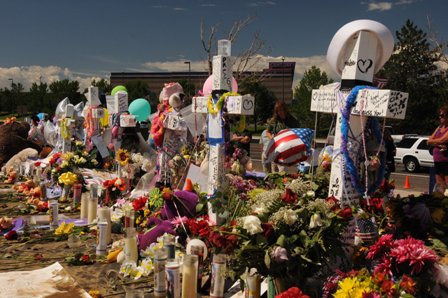 (CNN) -- Relatives of nine people killed last summer at an Aurora, Colo., movie theater said an invitation to attend an event on the eve of the remodeled complex's reopening is "disgusting" and "wholly offensive to the memory of our loved ones."

The Century Aurora 16 movie theater, where 12 people were killed and 58 were injured, is scheduled to reopen to the public January 18.

An e-mail sent to the families said Cinemark USA, Inc. would hold a "special evening of remembrance" for invited guests the prior evening.

The invitation and the timing of it -- two days after Christmas -- infuriated relatives of nine of those killed. They signed a blunt letter to the theater chain's management.

"During the holiday we didn't think anyone or anything could make our grief worse but you, Cinemark, have managed to do just that," the letter began.

The letter calls the Cinemark event a publicity ploy from a company that is oblivious to the emotional strain on the families of the victims.

"Our family members will never be on this earth with us again and a movie ticket and some token words from people who didn't care enough to reach out to us, nor respond when we reached out to them to talk, is appalling," the letter reads.

The group says it will urge others to boycott "the killing field of our children."

"The theater has no immediate comment," a Cinemark spokeswoman said when reached by phone.

The invitation, sent through the Colorado Organization for Victim Assistance, said a movie would follow a private ceremony at the remodeled theater complex.

It added: "We understand this may be a difficult time for you. Counselors will be available at the theater if you would like to speak to someone."

In December, the office of Aurora Mayor Steve Hogan announced the private event for victims and their families, first responders, local leaders and "to those working on the community healing process." The mayor and Gov. John Hickenlooper are expected to attend the event.

James Holmes is accused of going on a shooting spree during a midnight screening of the Batman film "The Dark Knight Rises" July 20, 2012, at the movie complex. He faces 152 charges.