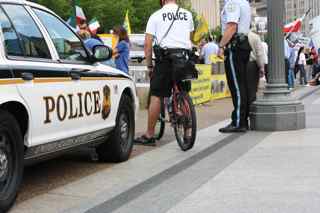 (CNN) -- Misconduct with prostitutes by U.S. Secret Service agents handling travel security for the president in April was not a one-off episode, according to a media report citing an investigation by the Department of Homeland Security.

The DHS Investigator General's results "contradict" previous testimony before Congress by Secret Service Director Mark Sullivan about the incident during President Obama's trip to Colombia to attend the Summit of the Americas, ABC News reported.

But a Secret Service official with knowledge of the investigation told CNN Thursday that Sullivan's statements in a hearing in May had been "truthful."

CNN has not seen the investigation results and cannot confirm the reported allegations.

As part of the advance detail before President Barack Obama's arrival to attend the summit, a dozen agents hit the clubs of Cartagena, Colombia, for a night of drinking that ended with them bringing women back to their hotel rooms.

Some of the women received money, and others did not ask for any, but in one case, an agent refused to pay, and the woman summoned a police officer.

Prostitution is legal in Colombia, but the news that some Secret Service agents were drinking heavily and taking prostitutes back to their hotel rooms raised security concerns and tarnished the reputation of the agency charged with protecting the president.

Testifying before Congress in May, Secret Service Director Mark Sullivan insisted the incident was an aberration -- just poor choices by a dozen agents under the influence of alcohol.

"This is not a cultural issue, this is not a systemic issue," Sullivan told the Senate Homeland Security Committee back then, arguing that similar misconduct hasn't occurred on thousands of other overseas trips by Secret Service agents.

"It is very difficult to respond to specific inquiries from a draft report that we haven't had an opportunity to review," a Secret Service official said in response to the media report Thursday. "Director Sullivan's testimony, approximately one month after the Cartagena incident, was truthful based on the Secret Service's investigative findings to date," said the official, who is not authorized to speak to the media and wished not to be named.

Agents had not confessed to prior dealings with prostitutes, when Sullivan was briefed before testifying, the official said. "One agent, who later admitted to the DHS Office of the Inspector General that he had indeed engaged in prior misconduct" had previously denied doing so to the Secret Service.

The inconsistency between the new investigation and Sullivan's past accounts has prompted a new call for answers from the Obama administration by lawmakers on Capitol Hill.

Johnson said he has received no response to his inquiries.

In his letter to Sullivan, Johnson expresses suspicions that the Secret Service director's testimony and other assurances concerning agents' conduct may have been misleading.

"My office's review of the DHS OIG report of investigation ... lead me to believe that these assurances were false."

CNN's Carol Cratty and Tom Cohen contributed to this report