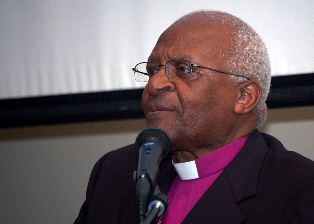 The foundation, which promotes good governance in the continent, was established by Sudan-born billionaire Mo Ibrahim.

An anti-apartheid leader and Nobel laureate, Tutu is an outspoken critic on issues affecting the continent and beyond.

"Tutu is and has throughout his life been one of Africa's great voices for justice, freedom, democracy and responsible, responsive government," the Mo Ibrahim Foundation said in a statement. "In everything he stands for, says and does, he displays a consistent determination to give a voice to the voiceless and to speak the uncomfortable truth."

Last month, Tutu reiterated his calls that former British Prime Minister Tony Blair and former U.S. President George W. Bush should be "made to answer" at the International Criminal Court for initiating the 2003 Iraq War.

At the time, the two leaders cited Iraq's ambitions to develop weapons of mass destruction as reasons for the war. No significant caches of chemical or biological weapons were found after the invasion.

The London-based foundation also awards an annual $5 million prize to a former African head of state who practices good governance.

Only a handful of leaders, including former South African President Nelson Mandela, have won the good governance award since it was launched in 2007. The foundation did not award the prize on certain years, saying there were no qualified candidates.