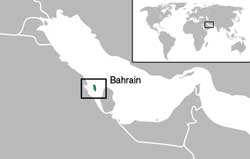 "You can jail me for three years or 30 years, but I will not back down or retreat," Rajab said after his sentence was read in a court, according to the Bahrain Center for Human Rights. Rajab is that group's president.

The sentence raised concerns from British and European Union officials who called for Bahrain to reconsider its length.

"Rajab's participation in these marches and provocation of his supporters have led to severe acts of violence; including fueled rioting, road blocking, arson, acts of sabotage targeting public and private properties, the use of petrol bombs and IEDs, amongst others," said a statement from the president's office of the Kingdom of Bahrain. "The Ministry of Interior announced such acts have caused injuries to over 700 security force members."

Rajab's lawyer told CNN he would file an appeal of the sentence after the end of Ramadan holiday next week.

"The only reason for targeting Rajab is to prevent him from continuing his legitimate and peaceful human rights work," the Bahrain Center for Human Rights said in a statement Thursday.

The country is ruled by the Al-Khalifa family, which has been in power since the 18th century. Many protesters are calling for the removal of the royal family, whom they blame for the country's high unemployment rate and for running a corrupt government that relies on torture and other harsh measures to clamp down on dissent.

On March 20, about 25 people in about a dozen cars pulled up to Rajab's house and took him to the offices of the Interior Ministry's investigative department. There, according to Rajab, he was beaten, blindfolded and interrogated about an armed suspect they believed he knew.

Bahrain, where the U.S. Navy anchors its Fifth Fleet, is a small, predominantly Shiite country governed by a Sunni royal family.

"Like many others in Bahrain, Nabeel Rajab is a prisoner of conscience, jailed solely for peacefully exercising his right to freedom of expression and assembly," Sahraoui said. "He should be released immediately and his convictions and sentences quashed. The authorities must also act to ensure that all human rights defenders are able to carry out their work without fear of reprisal."

"If anything, this latest verdict marks the end of the facade of reform in Bahrain. The international community can no longer be under the illusion that Bahrain is on the path of reform when confronted with such blatant ruthless tactics of suppressing dissenting voices. Bahrain's international partners need to make this loud and clear to the Bahraini authorities"

Amnesty International also released a comment from Rajab's wife, Sumaya, who was with him at the reading of the verdict.

"The sentence, although harsh and unfair, comes as no surprise to Nabeel and I," she said. "It shows how biased and corrupt the judiciary in Bahrain is. There are no human rights in Bahrain. As the defense team said, this sentence is the biggest scandal in the history of Bahrain judiciary."

The British Foreign Office raised concern about the length of the prison sentence and urged the Bahraini government "to act proportionately in all cases."

"The right of individuals to peaceful protest and freedom of expression is a fundamental part of any modern democracy and must be respected," the British statement said. "But we expect opposition activists to ensure their words and actions do not incite violence or other illegal acts."

The European Union's High Representative for Foreign Affairs and Security Policy Catherine Ashton said Rajab's sentence should "be reconsidered in the appeal process and that the same treatment will be given to all Bahraini citizens who are being tried for charges relating to the exercise of their fundamental freedoms."

"Fair and impartial justice is a key requirement to overcome the current challenges in Bahrain," Ashton said.

CNN's Hamdi Alkhshali and Mohammed Jamjoom contributed to this report.