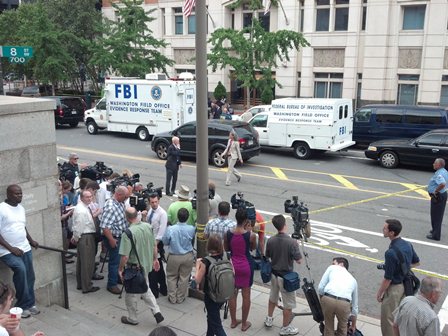 WASHINGTON (CNN) -- Authorities filed a criminal complaint Thursday accusing the suspect in the shooting at the Family Research Council of a federal firearms violation and assault with intent to kill, the Justice Department announced.

Floyd Lee Corkins II, 28, is accused of walking into the lobby of the conservative policy group Wednesday armed with a 9 mm pistol and shooting a security guard, according to authorities.

Corkins is scheduled to appear in court on the charges Thursday afternoon in U.S. District Court in Washington, the Justice Department said in a statement.

The firearms charge accuses Corkins of transporting firearms and ammunition across state lines when he took the Washington subway from Virginia into the city, according to prosecutors. The assault charge is a local District of Columbia offense.

A law enforcement official said the gunman made remarks opposing the council's policies before he fired. Investigators say it is too early to know whether the organization was targeted for its political views, but they made clear that would be part of the investigation.

"We don't know enough yet about him or his circumstances to be able to determine his connection to this group or to the business or to what, you know, mentally what he's doing or thinking. So we're going to try to sort it all out, and pull the evidence together, do as many interviews as we can, and get it all together," FBI Assistant Director James McJunkin said.

FBI spokeswoman Jacqueline Maguire said the case is being worked jointly by the FBI and the Metropolitan Police Department "to determine motive/intent and whether a hate crime/terrorism nexus exists."

Corkins, who lives in Herndon, Virginia, had worked as a volunteer at the DC Center for the LGBT Community. The group provides services and support to lesbian, gay, bisexual and transgender people, a source working with the center told CNN. He received a master's degree from George Mason University's College of Education and Human Development in 2006, the university said.

David Mariner, executive director of the DC Center, released a statement Wednesday night saying he was "shocked to hear that someone who has volunteered with the DC Center could be the cause of such a tragic act of violence.

"No matter the circumstances, we condemn such violence in the strongest terms possible. We hope for a full and speedy recovery for the victim and our thoughts are with him and his family," Mariner said in the statement.

D.C. Police Chief Cathy Lanier said a man entered the building in downtown Washington, was "confronted by a security guard" and opened fire, striking the guard.

The guard, identified Thursday by a Family Research Council spokesman as Leo Johnson, helped wrestle the gunman to the ground. Called a hero by police, the security officer was in stable condition after being shot in the arm.

"The security officer here is a hero as far as I'm concerned. He did his job. The person never made it past -- farther than the front door," Lanier said.

Steve Biondi, a tourist from New York, said he witnessed the first two police officers arrive at the scene. They ordered the suspect to put the gun down. The man got on the ground and did not appear to put up a fight, according to Biondi.

Police recovered a backpack and a vehicle believed to belong to the suspect, a law enforcement official told CNN.

The suspect's weapon was a legally obtained Sig Sauer 9 mm handgun bought at a gun shop in Virginia within the last week, according to another law enforcement official.

Family Research Council President Tony Perkins said "our first concern is with our colleague who was shot today. Our concern is for him and his family."

Launched in 1983, the council says it promotes "faith, family and freedom in public policy and public opinion."

Presumptive Republican presidential nominee Mitt Romney said he was appalled by the incident.

"There is no place for such violence in our society," he said in a statement. "My prayers go out to the wounded security guard and his family, as well as all the people at the Family Research Council whose sense of security has been shattered by today's horrific events."

The National Organization for Marriage, which has actively campaigned against same-sex marriage efforts, also condemned what it termed an attack on the Family Research Council.

"Everything points to the fact that this was politically motivated, and it's totally unacceptable," National Organization for Marriage President Brian Brown said in a Thursday appearance on CNN's "Early Start."

Brown called out the hate-tracking group Southern Poverty Law Center for listing the Family Research Council on its website, saying it was equating the group with violent extremist groups.

"The responsibility is on the shooter, but we need to have a civil debate over issues like redefining marriage," he said. "But we should not be attacking and labeling as hate groups those that we disagree. We should condemn violence of any sort, but we should also be responsible."

The SPLC says the Family Research Council defames gays and tries to make the case that the LGBT community is a threat to American society.

Brown said groups such as his are boosting security after the shooting.