19 Months After Mass Shooting, Ex-Rep. Giffords Moves Back to Tucson 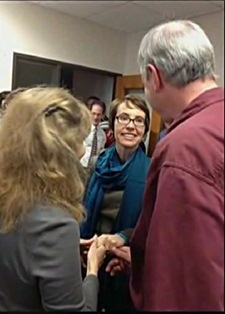 (CNN) -- Nineteen months after she and 18 others were shot at a political event -- six of them fatally -- former Rep. Gabrielle Giffords returned home Sunday to her native southern Arizona, her husband said.

Giffords has spent most of the time since the January 8, 2011, attack at medical facilities in Houston recovering from being shot in the head at a "Congress On Your Corner" event outside a Safeway supermarket in Tucson. She has returned to her hometown several times since that shooting, though not permanently until now.

"Moving back to Tucson today," her husband Mark Kelly, a retired Navy captain and astronaut, wrote Sunday on his Twitter feed. "Gabby has been waiting for this day for a long time."

Records from the Pima County Assessor's Office posted online indicate that Kelly and Giffords bought a 10-room, single family residence in June in central Tucson. The couple paid $1.495 million in cash for the property, which sold for half that price in November 2007, the records show.

Then in her third term, Giffords stepped down from her position in Congress in January 2012 to focus on her recovery. Ron Barber, a Giffords aide also wounded in the attack, now holds the seat.

Federal prosecutors said that, under the plea deal, Loughner will be sentenced to life in prison with no eligibility for parole -- meaning he will not get the death penalty, as might have happened with a conviction. His sentencing is set for November 15, prosecutors said.

The 23-year-old, whose legal proceedings had been complicated by questions about his mental health, waived his right to seek an insanity defense as part of his plea agreement.

Court documents released a few days after the shooting showed that investigators found a letter from Giffords in a safe at the house where Loughner lived with his parents, thanking him for attending a 2007 event.

"Also recovered in the safe was an envelope with handwriting on the envelope stating 'I planned ahead,' and 'my assassination' and the name 'Giffords,' along with what appears to be Loughner's signature," the affidavit stated.

In an online video announcing her retirement from Congress earlier this year, Giffords vowed her public service career was not over.

"I will return, and we will work together for Arizona and this great country," she said.