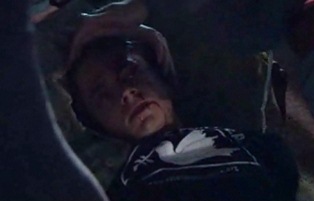 OAKLAND, Calif. (AP) -- Veering around police barricades, anti-Wall Street protesters held a late-night march through Oakland streets, a day after one of their number - an Iraq War veteran - was left in critical condition with a fractured skull following a clash with police.

The show of force in Oakland along with SWAT arrests in Atlanta have sent chills among some anti-Wall Street demonstrators, and protesters elsewhere rallied in support around the injured veteran, Scott Olsen.

Another showdown between police and protesters in Oakland appeared to be averted late Wednesday night as several hundred filed out of a plaza declared off-limits for overnight use and marched through nearby streets.

An AP photographer on the scene said police erected barricades to prevent the marchers from reaching a freeway, sending the group down side streets en masse.

Small contingents of officers could be seen following behind but there were no signs of any confrontations or arrests. The march tapered off after about an hour, with most of the protesters apparently dispersing.

At least one tent was back up Thursday morning, along with a handful of people. Police two days earlier cleared the plaza, which had grown to dozens of tents and raised health and safety concerns among city officials.

Olsen was marching with Oakland demonstrators Tuesday when he suffered a cracked skull in the chaos between officers and protesters. The 24-year-old Marine remained in critical condition, said a spokesman for Highland Hospital in Oakland.

It was not clear exactly what type of object hit the veteran or who might have thrown it, though the group Iraq Veterans Against the War said officers lobbed it.

Police Chief Howard Jordan said at a news conference that the events leading up to Olsen's injury would be investigated as vigorously as a fatal police shooting.

"It's unfortunate it happened. I wish that it didn't happen. Our goal, obviously, isn't to cause injury to anyone," the chief said.

In a show of solidarity with their West Coast counterparts, several hundred members of Occupy Wall Street marched past the padlocked gates surrounding New York's City Hall Wednesday night chanting "March with Oakland." While numerous police officers stood watch, the marchers circled City Hall and then broke up into smaller groups as they returned to Zuccotti Park. Police said early Thursday morning that about 10 people had been arrested.

While demonstrators in other cities have built a working relationship with police and city leaders, they wondered on Wednesday how long the good spirit would last and whether they could be next.

Will they have to face riot gear-clad officers and tear gas that their counterparts in Oakland faced Tuesday? Or will they be handcuffed and hauled away in the middle of the night like protesters in Atlanta?

"Yes, we're afraid. Is this the night they're going to sneak in?" said activist William Buster of Occupy Wall Street, where the movement began last month to protest what they see as corporate greed.

"Is this the night they might use unreasonable force?" he asked.

The message from officials in cities where other encampments have sprung up was simple: We'll keep working with you. Just respect your neighbors and keep the camps clean and safe.

Business owners and residents have complained in recent weeks about assaults, drunken fights and sanitation problems. Officials are trying to balance their rights and uphold the law while honoring protesters' free speech rights.

Villaraigosa told the Los Angeles Times that he respects the protesters right to peacefully assemble and express their views, but they must respect city laws and regulations.

Some cities, such as Providence, R.I., are moving ahead with plans to evict activists. But from Tampa, Fla., to Boston, police and city leaders say they will continue to try to work with protesters to address problems in the camps.

But tensions reached a boiling point after a sexual assault, a severe beating and a fire were reported and paramedics were denied access to the camp, according to city officials. They also cited concerns about rats, fire hazards and public urination.

Demonstrators disputed the city's claims, saying that volunteers collect garbage and recycling every six hours, that water is boiled before being used to wash dishes and that rats have long infested the park.

When riot gear-clad police moved in early Tuesday, they were pelted with rocks, bottles and utensils from people in the camp's kitchen area. They emptied the camp near city hall of people, and barricaded the plaza.

Protesters were taken away in plastic handcuffs, most of them arrested on suspicion of illegal lodging.

Demonstrators returned later in the day to march and retake the plaza. They were met by police officers in riot gear. Several small skirmishes broke out and officers cleared the area by firing tear gas.

The scene repeated itself several times just a few blocks away in front of the plaza.

Tensions would build as protesters edged ever closer to the police line and reach a breaking point with a demonstrator hurling a bottle or rock, prompting police to respond with another round of gas.

The chemical haze hung in the air for hours, new blasts clouding the air before the previous fog could dissipate.

The number of protesters diminished with each round of tear gas. Police estimated that there were roughly 1,000 demonstrators at the first clash following the march. About 100 were arrested.

On Wednesday, Oakland officials allowed protesters back into the plaza but said people would be prohibiting from spending the night, potentially bringing another clash with police.

About 1,000 people quickly filled the area, but later many of them filed out and began their march.

In Atlanta, police in riot gear and SWAT teams arrested 53 people in Woodruff Park, many of whom had camped out there for weeks as part of a widespread movement that is protesting the wealth disparity between the rich and everyone else.

Mayor Kasim Reed had been supportive of the protests, twice issuing an executive order allowing them to remain.

Reed said on Wednesday that he had no choice to arrest them because he believed things were headed in a direction that was no longer peaceful. He cited a man seen walking the park with an AK-47 assault rifle.

"There were some who wanted to continue along the peaceful lines, and some who thought that their path should be more radical," Reed said. "As mayor, I couldn't wait for them to finish that debate."

Reed said authorities could not determine whether the rifle was loaded, and were unable to get additional information.

An Associated Press reporter talked to the man with the gun earlier Tuesday.

He wouldn't give his name - identifying himself only as "Porch," an out-of-work accountant who doesn't agree with the protesters' views - but said that he was there, armed, because he wanted to protect the rights of people to protest.

In Portland, Ore., the protest seems to be at a crossroads. Organizers have been dealing with public drunkenness, fighting and drug abuse for weeks, especially among the homeless who are also in the camp.

Some are floating the idea of relocating it, possibly indoors. Others see that as capitulation.

"I don't know if it would be a good idea. Part of the effectiveness of what's going on here is visibility," protester Justin Neff said. "Though I'd do it if there's a possibility that we'd get seen and noticed. I don't know how that would work indoors."

City officials haven't said what would cause them to forcibly evict the protesters. They said they evaluate the camp daily.

In Baltimore, protesters like Casey McKeel, a member of Occupy Baltimore's legal committee, said he wasn't sure aren't sure what to expect from city officials, noting that some cities have arrested protesters in recent weeks.

"Across the country we're seeing a wide range of reactions," he said. "For now we're hoping the city will work with us."

Mayor Stephanie Rawlings-Blake said she is willing to work with them, but they should realize that they are camping out in a city park and that was not its intended use.

"I have absolutely no interest in a violent exchange," she said. "It's not about pitching a tent. It's about getting the work done."