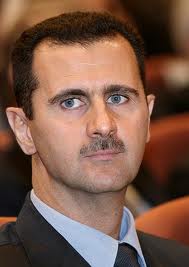 The bloodiest clashes occurred in the restive city of Daraa, where human rights activists and witnesses said Syrian security forces opened fire on tens of thousands of protesters, killing 25 people and wounding hundreds.

At the same time, state-run TV said 19 policemen and members of the security forces were killed when gunmen opened fire on them. It was the first significant claim of casualties by the Syrian government, which has contended that armed gangs rather than true reform-seekers are behind the unrest - and it could signal plans for a stepped-up retaliation.

The protests were in response to calls by organizers to take to the streets every Friday to demand change in one of the most rigid nations in the Middle East. Marches were held in cities across the country as the movement showed no sign of letting up, despite the violent crackdowns.

At least 32 protesters were killed nationwide, according to human rights activists. The bloodshed lifted the death toll from three weeks of protests to more than 170 people, according to Amnesty International.

The calls for reform have shaken the regime of President Bashar Assad, whose family has ruled Syria for more than 40 years. Assad, a British-trained eye doctor, inherited power from his father 11 years ago and tried to help the country emerge from years of international isolation and lift Soviet-style economic restrictions.

But despite early promises of social and political change, Assad has slipped back into the autocratic ways of his father.

As the wave of protests have gathered steam, Assad has offered some limited concessions - firing local officials and forming committees to look into replacing the country's despised emergency laws, which allow the regime to arrest people without charge. On Thursday, he granted citizenship to thousands of Kurds, fulfilling a decades-old demand of the country's long-ostracized minority.

But those gestures have failed to mollify a growing movement that is raising the ceiling on its demands for concrete reforms and free elections.

"The protests are about Syrians wanting freedom after 42 years of repression," said Murhaf Jouejati, a Syria expert at George Washington University. "Mr. Assad may fire all the people he wants, this still doesn't touch on the basic issues and the basic demands of the protesters."

Witness accounts out of Syria could not be independently confirmed because the regime has restricted media access to the country, refusing to grant visas to journalists and detaining or expelling reporters already in the country. Daraa has largely been sealed off and telephone calls go through only sporadically.

But residents, who spoke to The Associated Press independently of each other, said mosques were turned into makeshift hospitals to help tend to hundreds of wounded.

One man who helped ferry the dead and wounded to the city's hospital said he counted at least 13 corpses.

"My clothes are soaked with blood," he said by telephone from Daraa. Like most activists and witnesses, he requested anonymity for fear of reprisals.

A nurse at the hospital said they had run out of beds; many people were being treated on the floor or in nearby mosques.

Videos posted on YouTube showed demonstrations in at least 15 towns, large and small, across the country. The videos could not be independently confirmed, but they appeared to show the most widespread gatherings since protests began.

Ammar Qurabi, who heads Syria's National Organization for Human Rights, said 32 people were killed nationwide: 25 in Daraa, three in the central city of Homs, three in the Damascus suburb of Harasta and one in the suburb of Douma.

Douma has become a flashpoint after eight people were shot dead there last Friday.

Protests were also reported in Latakia, which has a potentially volatile mix of different religious groups. The city has seen violence in recent weeks, and some fear it could take on a dangerous sectarian tone in Latakia.

Syria had appeared immune to the unrest sweeping the Arab world until three weeks ago, when security forces arrested a group of high school students who scrawled anti-government graffiti on a wall in Daraa.

Protests then exploded in cities across the country.

A city of about 300,000 near the border with Jordan, Daraa is suffering sustained economic effects from a yearslong drought.

AP writers Elizabeth A. Kennedy and Diaa Hadid in Cairo contributed to this report.