WASHINGTON (NNPA) – The National Urban League, known for its hundreds of affiliates tucked in mostly inner city neighborhoods across the nation is confronting the human faces of unemployment, home loss and economic blight every day. 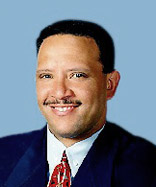 That is the reason that a hundred years since its founding, NUL President Marc Morial is challenging people – from the Congress to the grassroots - to see and be sensitized to the economic pain that his affiliate staff members must deal with daily.
"Look around, and they will see what we see: 15 million Americans out of work. A national unemployment rate of nearly 10 percent, with African-American unemployment much worse at nearly 16 percent," he listed in prepared remarks for his anniversary speech Wednesday at the National Urban League kick off, held at the First Baptist Church Glenarden in Landover, Md.
He continued, "Nearly half of African-American teens can't find work. Look around, and they will see what we see: a million young people dropping out of school each year. Look around, and they will see what we see: African-Americans and Latinos are two to four times more likely to lack health insurance. Look around, and they will see what we see: an epidemic of housing foreclosures; tax cuts being promoted by some for only the wealthiest; jobs being shipped overseas; a trillion dollars misspent on the war in Iraq."
And even with the clarity of those social and economic ills, some still have the audacity to ask "whether the National Urban League is still relevant," Morial said.
"Perhaps they suffer from a form of beltway Blindness, or they are living in a gated community, or in a fancy office that is detached from reality."
The NUL, moving into its second century, once again finds itself shepherding the nation through a crisis, Morial said. It is those who are in positions to avert the disasters that disappoint him most.
"In the face of all of this, as opposed to a coalition of the willing, we have a cabal of obstructionists in the United States Senate, who've used the filibuster time and time again to block action on things like summer jobs for our teens," he said. "How can anyone stand in the way of providing real work opportunities to the young people who represent our future leaders? How can anyone stand in the way of providing an opportunity for young people to learn the value of real work and the work ethic that summer job opportunities can provide?"
Morial says the summer jobs failure is an indication that America has lost a significant part of its conscience.
"There is something inconsistent and wrong when a nation will commit a trillion dollars to bail out financial institutions and a trillion dollars to undertake wars and a trillion dollars in tax loopholes filtered through the federal budget that would equivocate when it comes to something so basic, simple and wholesome as summer jobs for our teens."
He promised that the NUL will not flinch, but will stay around into the next century as a friend to the poor and disadvantaged:
"As long as there are people out of work, as long as there are people in need of better schools, as long as there's a need for safe, decent and wholesome afterschool programs, as long as there are people who long to become homeowners and are looking for somewhere to turn, this National Urban League and Urban League Movement is not only relevant, but we are here to stay."