Benjamin Koconis Special to the NNPA from the Washington Informer
Published: 26 July 2010 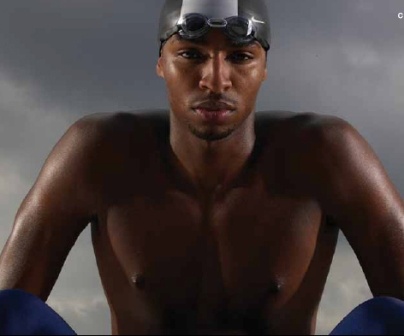 WASHINGTON (NNPA) - Although an Olympic swimmer's message about the importance of water safety was too late to save a 6-year-old Northeast girl from drowning last month, many others may be saved by his dedication to promote swimming lessons among minority youth nationwide.
Cullen Jones, the first African-American swimmer to set a world record and win a gold, made a stop in the District recently where he hosted a series of events to promote "Make a Splash"— a USA Swimming initiative, which aims to promote swimming lessons by providing grant money to lesson providers to advance their programs.
Jones' started his day hosting a breakfast at the Marriott Wardman Park, in Northwest, where he told an audience of nearly 100 about the large numbers of minority children who have inadequate swimming skills – like himself, prior to his mother insisting that he take formal swimming lessons.
"I understand how it feels to be afraid of the water," said the 26-year-old 50-meter freestyle swimmer. "When I was five-years-old I almost drowned."
Jones tells audiences in every city he travels to of his own near death experience at Dorney Park & Wildwater Kingdom, a water park, in Allentown, Pa., in 1989.
"My inner tube capsized, but I was determined to hold on because that is what my dad told me to do—I subsequently blacked out," he said.
Mel Stewart, 41, another Olympic swimmer and gold medalist who spoke at the breakfast said swimmers, even of the Olympic caliber, know to respect the water and are often the most protective when it comes to children's water safety.
"We never swim alone. We have all been in positions where we have got a cramp. In an instant you realize it could be your death."
Anyone is capable of drowning, Jones said.
"I love asking kids—I'm a gold medalist— I went to the Olympics—how many of you think that I almost drowned—they never believe it."
Jones admitted he was slow to get back in the water after his frightening experience at the water park, but said after finding a good instructor he soon gained his confidence back. He advises children who are scared of the water to do the same.
"There are certain things I don't know how to do. I would love to learn how to play guitar, but in order to do that, I need to take lessons." Jones said the same goes for swimming— if you don't know how, you absolutely must take lessons.
The "Make a Splash" campaign continued at Turkey Thicket Pool, a Department of Parks and Recreation facility in Northeast Washington, where Jones gave several children swimming lessons. Unfortunately, a dark cloud continues to loom over the public pool where young Yiana-Michelle Ballard drowned on June 23.