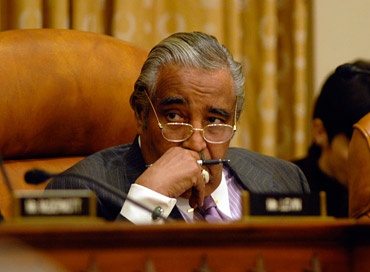 NEW YORK (AP) -- Some of U.S. Rep. Charles Rangel's constituents greeted the embattled politician with a warm handshake Saturday, saying his decades of public service outshine the ethics cloud hanging over him as he seeks re-election.
``Charlie has done as much for this community as any politician has for theirs -- or maybe more,'' Herbert Collins, a retired transportation worker, said after Rangel gave a speech on health care. ``He deserves another term because I don't see anyone out there who can do any better.''
But outside, in the sweltering heat, another Harlem resident was in no mood for compromise.
``I don't think he's fit to serve in Congress, he's not reliable to represent us,'' said 27-year-old A.G. Ousmane, who was selling $1 bottles of ice-cold water to passers-by from a cooler. ``We need someone young and clear like a bottle of water, with a new swagger -- not with a history like Rangel's.''
With temperatures in the 90s, Rangel arrived at Harlem Hospital dressed all in white, later telling reporters that he is counting on presumption of innocence until proven guilty.
``I don't want any special breaks,'' he said. ``All I want is fairness.''
Rangel, 80, smiled broadly at supporters in an elevator that took him to the hospital's second floor, where he spoke at a community health care forum. He emphasized the need for preventive care -- especially for conditions like diabetes, which is more common among black Americans than others.
``Where's my congressman?'' one woman shouted at him before he spoke.
``Hi darlin'! What a welcome!'' he responded, to roars of approval.
Supporters handed out fliers showing a picture on Rangel's face and the words ``He Delivers.''
This was home turf for the politician who was once the youngest member of Harlem's ``Gang of Four'' -- the other three being Percy Sutton, Basil Paterson and David Dinkins. They mentored Rangel into a position of power he had not relinquished until this year.
In March, the Democrat stepped down as chairman of the House Ways and Means Committee.
And now the main issue for fellow Democrats is whether Rangel's fight for his political life might weaken their chances of retaining majority in the House in the November elections.
The question is, can he win re-election despite his troubles?
``Absolutely! Overwhelmingly!'' said Sylvia Tyler, 72, a retired schoolteacher and president of the West Harlem Independent Democrats.
Street vendor Curtis Parker said he hadn't decided whether to vote for Rangel.
Still, ``I'm cool with him, I like Charlie Rangel; he's a good guy,'' said the 47-year-old, a cigarette dangling from his lips.
The building Rangel calls ``my home hospital'' is across the street from the Lennox Terrace apartments where the congressman is accused of using four rent-subsidized units in violation of New York City law, according to people familiar with the allegations who were not authorized to discuss them publicly.
They say he also is charged with violating ethics rules for use of congressional stationery to raise money for a university center bearing his name and failure to report income as required on his annual financial disclosure forms.
``These are alleged violations,'' he said Saturday, adding that stepping aside ``wouldn't really be the American thing to do.'' The former federal prosecutor said he owes it ``to the process'' to first find out what the House Ethics Committee says, ``and maybe, just maybe, I have evidence to prove that it's not substantive.''
Rangel said he can't comment on specific allegations until the committee formally unveils them on Thursday.
But the ever-effusive congressman could not hold back his emotions on Saturday.
Now more than ever, Rangel said, he is looking for ``a lot of love and affection and support'' from his constituents, which he has enjoyed in the past.
He said he is deriving strength from his belief that all Americans have the right to ``fairness, fairness, fairness ... what I'm searching for is fairness.''
Against the advice of aides, given his age and the heat, he planned to join neighborhood activities in Harlem this weekend, including a visit with families at public housing projects.
Rangel's constituents live in a congressional district that straddles Harlem, Manhattan's Washington Heights neighborhood and a part of the Bronx.
On Saturday, they repeatedly credited him with helping start the government-funded Upper Manhattan Empowerment Zone in 1995 to bolster small businesses, while fighting for better education and services for the homeless and elderly.
___
Associated Press Writer Larry Margasak in Washington contributed to this report.