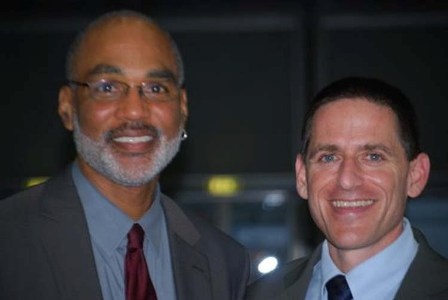 VIENNA, Austria (NNPA) – Phill Wilson, president and CEO of the Black AIDS Institute, has good reasons for describing AIDS as a Black disease. Although Blacks are 12.8 percent of the U.S. population, they represent 45 percent of all people infected each year with HIV, the virus that causes AIDS.

Black women represent 66 percent of all new HIV cases each year among women, a study conducted in five major cities found that 46 percent of gay and bisexual Black men have contracted HIV, compared to 21 percent of similar White men, and although Black teenagers are only 15 percent of U.S. teen population, they account for 68 percent of all new AIDS cases among teens.
In what it calls the first federal study of its kind, the Centers for Disease Control and Prevention (CDC) has now added poverty as another factor – at least for heterosexuals living in poor, urban communities in the United States – likely to increase the risk of becoming infected with HIV.
"The study reveals a powerful link between poverty and HIV risk, and a widespread HIV epidemic in America's inner cities," Dr. Kevin Fenton, director of CDC's National Center for HIV/AIDS, Viral Hepatitis, STD and TB Prevention, said in a statement. "In this country, HIV clearly strikes at the economically disadvantaged in a devastating way."
The CDC findings were released here at the biennial international AIDS Conference. The study, conducted in 2006 and 2007, included more than 9,000 heterosexual adults aged 18 to 58, about 77 percent of whom were Black. Specific census tracts in 25 communities with a poverty rate of at least 20 percent were selected to be studied. The CDC report combined data from census tracts in 23 of the 25 cities, including Atlanta, Washington, D.C., Newark, St. Louis, New Orleans, Dallas, Detroit, Philadelphia, Los Angeles and Seattle. It did not provide data on the individual cities.
Although the CDC has conducted major studies on HIV prevalence rates among gay and bisexual men as well as drug users, this is the first time it has conducted a separate study on heterosexuals living in poor urban communities.
Researchers were surprised to discover that although African-Americans overall have disproportionately high HIV- infection rates, there was no significant racial or ethnic gap among heterosexuals living in poor urban neighborhoods.
"Within the low income urban areas included in the study, individuals living below the poverty line were at greater risk for HIV than those living above it (2.4 percent prevalences vs. 1.2 percent), though prevalence for both groups was far higher than the national average (0.45 percent)," the CDC said in a statement. "There were no significant differences in HIV prevalence by race or ethnicity in these low income urban areas: prevalence was 2.1 percent among blacks, 2.1 percent among Hispanics, and 1.7 percent among whites.
"By contrast, the U.S. epidemic overall is characterized by severe racial/ethnic disparities: the HIV prevalence rates for blacks is almost 8 times that of whites, and the HIV prevalence rate among Hispanics is nearly 3 times that of whites."
In an interview Sunday with a group of African-American reporters assembled by the Black AIDS Institute, Dr. Jonathan Merimin, director of the CDC's Division on HIV/AIDS Prevention, stated, "There is nothing biological that has caused African-Americans to have such a disproportionate rate of HIV infection. It's the social, it's the economic, it's the epidemilogical environment in which people live."
He added, "There are multiple factors associated with HIV infection in the United States.
One of the main factors is race. In addition, even among African-Americans, poverty is also a risk factor, as it is with others."
According to the National Poverty Center at the University of Michigan, 24.7 percent of Blacks lived below the poverty line in 2008, compared to 23.2 percent of Hispanics, 8.6 percent of non-Hispanic Whites and 11.8 percent of Asians. Poverty was defined in 2007 as an individual with an annual income of approximately $10,000 or less.
"What's surprising about these results is that if you are living in these areas and your household income is less than $10,000 a year, your're seven times more likely to have HIV than if you're in these areas and your household income is greater than $50,000 a year," said Mermin, whose department supervised the study.
Phill Wilson of the Black AIDS Institute looked at the numbers from another perspective.
He said, "The study tells us that when other racial and ethnic groups face the same social determinants of health as Blacks – the social and econiomic conditions within which they live and that impact their well-being – their HIV rates rise to similar levels as those of Blacks, even for Whites whose rate of infection is normally substantially lower than rates for both Blacks and Latinos."
The link between poverty and HIV is an intriguing one that raises critical questions about access to health care, the socio-economic standing of sexual partners and the impact one's environment has on contracting the virus.
CDC officials acknowledge that additional research needs to be conducted now that a direct link has been clearly established between poverty and HIV.
"Why poverty is associated with HIV infection among African-Americans and even more so, perhaps, among White Americans and Latino Americans?" Mermin asked, rhetorically. "That's something we need to look at."