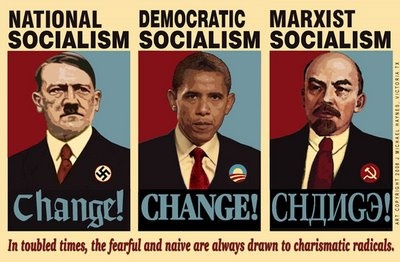 DES MOINES, Iowa (AP) — A billboard created by an Iowa tea party group comparing President Barack Obama to Adolf Hitler and Vladimir Lenin has been removed. At the same time, the NAACP has passed a resolution condemning the Tea Party movement for its rampant racism.
Kent Beatty, the general manager of the company that owns the billboard, says a North Iowa Tea Party representative called Tuesday night and asked that the sign in downtown Mason City be removed.
Beatty says his company replaced the sign Wednesday morning with a public service announcement.
The original sign showed photographs of Obama, Nazi leader Hitler and communist leader Lenin beneath the labels "Democrat Socialism," "National Socialism," and "Marxist Socialism."
Some tea party members criticized the sign, and North Iowa Tea Party co-founder Bob Johnson acknowledged the pictures overwhelmed the intended message of anti-socialism.
Ben Jealous, NAACP president and CEO, said they are targeting the Tea Party's racist elements, not the organization as a whole.
"We take no issue with the Tea Party. We believe in freedom of assembly and people raising their voices in a democracy," Ben Jealous, president and CEO of the National Association for the Advancement of Colored People, said in a statement. "We take issue with the Tea Party's continued tolerance for bigotry and bigoted statements. The time has come for them to accept the responsibility that comes with influence and make clear there is no space for racism and anti-Semitism and other forms of bigotry in their movement."
The Tea Party has denied racism, instead telling CNN that the NAACP should be considered racist because they use the word "colored" in their name. In an interview with CNN Jealous said there is ample evidence that there is unchecked racism and bigotry at Tea Party events. Instead of directly addressing those issues, the Tea Party has blamed the messenger, he told CNN.