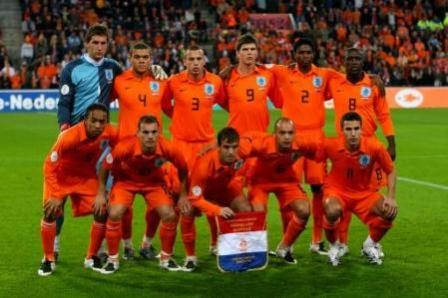 JOHANNESBURG — The first World Cup in Africa appropriately presents something new: Spain or the Netherlands as a first-time champion.
The Spaniards and Dutch will meet Sunday at Soccer City after winning tight semifinals. It's the first final for the Spaniards, who broke a 44-year major championships drought when they won the European crown two years ago.
For the Dutch, pictured at left, it's a third trip to the title game, having lost in 1974 and '78. The nations never have met in a World Cup and have split nine games 4-4 with one draw.
The Skanner News Video click here
http://video.ap.org/?t=By%20Section/Sports&g=0707dv_wc_spain_germany&f=fg00201
Spain is a 1-2 favorite to win the final, according to BetUS.
Both teams rolled into this tournament with long streaks of success, and the Netherlands' string remains intact: 25 matches without a loss and 10 straight victories, including all six in South Africa, the only team to manage that.
"We know we can play football," captain Giovanni van Bronckhorst said. "To be mentally strong is now most important." 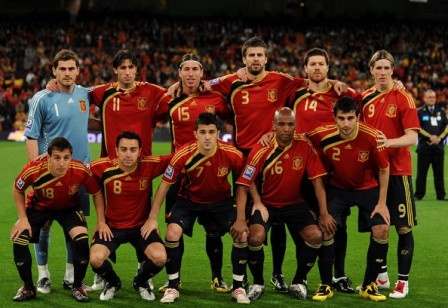 Mentally fragile has been the World Cup description for both nations. The Dutch in particular regularly have wasted their deep pool of soccer talent by going out early in big events since the loss to Argentina in the 1978 final. They won the '88 European Championship and fell to Brazil in the World Cup semifinals 10 years later.
Other than that, it's pretty much been rotten Oranje.
Spain, pictured left, didn't even do as well at the Netherlands, consistently flopping in the biggest moments. But the so-called golden generation for La Roja has changed the team's direction, and it showed in particular Wednesday night against Germany.
No team was more dominant in this World Cup than the Germans, yet they played conservatively, even a bit timidly when faced with David Villa, Andres Iniesta, Xavi, Xabi Alonso and the rest of the Spaniards. So Spain controlled the match, finally breaking through on Carles Puyol's header goal — you can bet Germany wasn't prepared for a defender to provide the only offense.
"The group deserves this but we want more," said Spain striker David Villa, who is tied with Netherlands playmaker Wesley Sneijder for the tournament scoring lead at five goals each. "We are happy to be in the final, that was our objective, but now we want to be champions."
To be champions, the Spaniards will need to shut down the Dutch the way they did the Germans, who lead the tournament with 13 goals. Sneijder, Arjen Robben, Robin van Persie, Dirk Kuyt and the rest of the Oranje have 12 goals and can crush opponents when given room to create.
But so can the Spanish, the best passing team in the world; yes, even better than Brazil.
Don't look for counterattacks Sunday. The Dutch will build their probing offense from goalkeeper Maarten Stekelenburg on out, unafraid to let their somewhat inexperienced keeper begin the passing sequences they favor.
Spain will get the ball to the feet of Iniesta or Xavi, then try to spring Villa or someone else down the wings or in the middle. Long passes will be rare. Shots might be, too.
Goals? Whichever team calms its nerves best should get enough of them to finally carry off the prize.