Large-scale disaster — this time in the form of BP's crude oil — has again hit the Gulf Coast, and with it have returned the familiar white trailers that the government provided to survivors of Hurricane Katrina years ago. 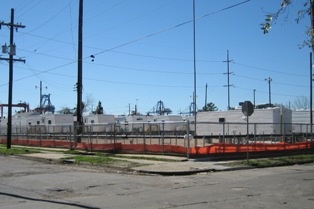 According to The New York Times, these trailers — known to have high levels of formaldehyde, a carcinogen – are popping up again in connection with the BP oil disaster, potentially putting more people at risk of the health problems associated with the industrial chemical: nasal cancer,
In March, The Washington Post reported that the federal government was offloading thousands of these old FEMA trailers. Some of them, purchased in bulk by middlemen, are now being resold to cleanup workers and their employers, who are scrambling for housing, the Times reported, even though the government has "banned them from ever being used for long-term housing again."
As ProPublica has reported extensively for years after Hurricane Katrina, the federal government downplayed concerns about the trailers' formaldehyde levels, despite early warnings from whistleblowers. It only later acknowledged it was applying the wrong exposure standard to judge their safety.
According to FEMA, these trailers are not intended for use as housing -- buyers must be informed of this and warning labels must be posted. According to the Times, however, these rules aren't always being followed by the middlemen who are selling them:
Officials with the inspector general's office of the General Services Administration said Wednesday that they had opened at least seven cases concerning buyers who might not have posted the certification and formaldehyde warnings on trailers they sold.
Federal records indicate that of the hundreds of companies and individuals who have bought the trailers, dozens are in Louisiana. They include Henderson Auctions, which bought 23,636 units for $18 million, and Kite Brothers RV, which bought 6,511 mobile homes and travel trailers for $16 million.
On Henderson Auctions' Web site, a spokeswoman is quoted in a news video saying that people who live on the street or in their cars would much rather live in the trailers and that the formaldehyde has dissipated after four or five years.
Clearly, folks are still living in some of these trailers. Here's one of the buyers, to the Times:
John Sercovich, the owner of Bud's Boat Rentals in Belle Chasse, La., said that he thought the trailer he bought for some of his workers to stay in was more than adequate.
"We couldn't have afforded it any other way," he said.
Most of the workers in the Gulf, the Times piece pointed out, are not living in the trailers. (And good thing — they have other health concerns to worry about.)
Finally, while we're on the subject of formaldehyde, it's also worth noting that the EPA declared it a known carcinogen in a draft risk assessment released last month. As we've reported, this assessment is one that David Vitter, a Louisiana senator with ties to the formaldehyde industry, managed to get the EPA to delay for quite some time.

Pro Publica is a nonprofit investigative journalism site producing high quality reporting in the public interest.  The photo is from Wikipedia.