Closing in on Genes that Help People Live to 100 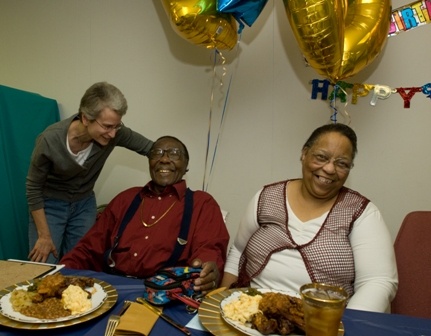 WASHINGTON (AP) -- The oldest among us seem to have chosen their parents well. Researchers closing in on the impact of family versus lifestyle find most people who live to 100 or older share some helpful genes.
But do not give up on diet and exercise just yet.
In an early step to understanding the pathways that lead to surviving into old age, researchers report in the online edition of the journal Science that a study of centenarians found most had a number of genetic variations in common.
That does not mean there is a quick test to determine who will live long and who will not -- a healthy lifestyle and other factors are also significant, noted the team led by Paola Sebastiani and Thomas T. Perls of Boston University.
Nevertheless, Perls said the research might point the way to determining who will be vulnerable to specific diseases sooner, and there may be a possibility, down the road, to help guide therapy for them.
The team looked at the genomes of 1,055 Caucasians born between 1890 and 1910 and compared them with 1,267 people born later.
By studying genetic markers the researchers were able to predict with 77 percent accuracy which came from people over 100.
``Seventy-seven percent is very high accuracy for a genetic model,'' said Sebastiani. ``But 23 percent error rate also shows there us a lot that remains to be discovered.''
The centenarians could be fitted into 19 groups with different genetic signatures, they found. Some genes correlate with longer survival, others delayed the onset of various age-related diseases such as dementia.
``The signatures show different paths of longevity,'' Sebastiani said.
In general, the centenarians remained in good health longer than average, not developing diseases associated with old age until in their 90s, according to the study.
The researchers were surprised, Sebastiani said, that they found little difference between the centenarians and the control group in genetic variations that predispose people to certain illnesses.
``We found that what predisposes to a long life is not lack of disease associated variants, but the presence of protective variants,'' she said at a briefing.
In addition, 40 percent of ``super-centenarians'' aged 110 and over had three specific genetic variants in common.
Perls cautioned that this is a very complex genetic puzzle and ``we're quite a ways away, still, in understanding what pathways are governed by these genes.''
``I look at the complexity of this puzzle and feel very strongly that this will not lead to treatments that will get people to be centenarians,'' he said. But it may help in developing a strategy and screenings that will help find what treatments will be needed down the road.
While this study, begun in 1995, focused on Caucasians, the researchers said they plan to extend it to other groups, including studying Japan, which has large numbers of elderly.
``Inheritability of longevity has been looked at, so genes do play a role,'' said Dr. Kenneth S. Kendler of the Department of Human and Molecular Genetics at Virginia Commonwealth University.
But so do other factors ``such as driving motorcycles fast and smoking,'' said Kendler, who was not part of the research team.
The 77 percent accuracy rate reported in this study is better than other groups have been able to do, Kendler added.
The U.S. study found that about 85 percent of people 100 and older are women and 15 percent men.
``Men tend to be more susceptible to mortality in age-related diseases,'' Perls said. ``Once they get a disease they more readily die. Women, on the other hand, seem to be better able to handle these diseases, so they tend to have higher levels of disability than men, but they live longer than men.''
The study was funded by grants from the National Institute of Aging and the National Heart Lung and Blood Institute of the National Institutes of Health.