NEW ORLEANS (AP) -- BP's massive oil spill became the largest ever in the Gulf of Mexico on last week based on the highest of the federal government's estimates, an ominous record that underscores the oil giant's dire need to halt the gusher.
Meanwhile, a federal lawsuit filed by several wildlife protection groups claims BP's practice of burning off spilled oil in the Gulf of Mexico likely is killing endangered sea turtles. 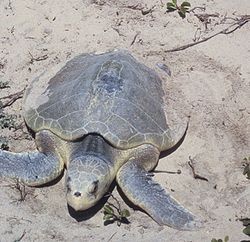 And a scientist says he's spotted threatened whale sharks swimming through heavy oil a few miles from BP's spewing well in the Gulf of Mexico.

The oil that's spewed for two and a half months from a blown-out well a mile under the sea hit the 140.6 million gallon mark, eclipsing the record-setting, 140-million-gallon Ixtoc I spill off Mexico's coast from 1979 to 1980. Even by the lower end of the government's estimates, at least 71.7 million gallons are in the Gulf.
The growing total is crucial to track, in part because London-based BP PLC is likely to be fined per gallon spilled, said Larry McKinney, director of Texas A&M University at Corpus Christi's Gulf of Mexico research institute.
``It's an important number to know because it has an impact on restoration and recovery,'' McKinney said.
The oil calculation is based on the higher end of the government's range of barrels leaked per day, minus the amount BP says it has collected from the blown-out well using two containment systems. BP collected a smaller amount of oil than usual on Wednesday, about 969,000 gallons.
Measuring the spill helps scientists figure out where the missing oil is, hidden below the water surface with some even stuck to the seafloor. Oil not at the surface damages different parts of the ecosystem.
``It's a mind-boggling number any way you cut it,'' said Ed Overton, a Louisiana State University environmental studies professor who consults for the federal government on oil spills. ``It'll be well beyond Ixtoc by the time it's finished.''
And passing Ixtoc just before the July Fourth weekend, a time of normally booming tourism, is bitter timing, he said.
The sea turtle lawsuit filed Wednesday by the Animal Welfare Institute and other groups asks U.S. District Judge Carl Barbier to restrict BP's ``controlled burns'' of oil. The oil gusher began after the April 20 explosion on the Deepwater Horizon drilling rig.
A plaintiffs' lawyer says it is a ``virtual certainty'' that turtles have been caught and burned alive.
Barbier is scheduled to hear arguments Friday on the groups' request for a temporary restraining order.
BP spokesman Mark Proegler says the company has tried to avoid accidentally burning turtles, using crews in boats to look for turtles before oil is burned.

Whale sharks can be as long as a transit bus, but pose no known threat to humans

The University of Southern Mississippi researcher who's studied their migratory habits in the Gulf says the question now is how many are dying in the oil.
Hoffmayer said three of the sharks were spotted within four miles of the well site on Monday. They migrate north in late spring from waters off the Yucatan Peninsula to feed off the mouth of the Mississippi River.
He says the sighting confirms fears that the animals don't know to stay away from the oil.
The BP spill, which began after the Deepwater Horizon drilling rig explosion killed 11 workers April 20, is also the largest spill ever recorded offshore during peacetime.
But it's not the biggest in history.
That happened when Iraqi forces opened valves at a terminal and dumped about 460 million gallons of oil in 1991 during the Persian Gulf war.
As the Gulf gusher continued spewing, the remnants of Hurricane Alex whipped oil-filled waves onto the Gulf Coast's once-white beaches. The government has pinned its latest cleanup hopes on a huge new piece of equipment: the world's largest oil-skimming vessel, which arrived Wednesday.
Officials hope the ship can scoop up to 21 million gallons of oil-fouled water a day. Dubbed the ``A Whale,'' the Taiwanese-flagged former tanker spans the length of 31/2 football fields and is 10 stories high.
It just emerged from an extensive retrofitting to prepare it specifically for the Gulf.
``It is absolutely gigantic. It's unbelievable,'' said Overton, who saw the ship last week in Norfolk, Va.
The vessel looks like a typical tanker, but it takes in contaminated water through 12 vents on either side of the bow. The oil is then supposed to be separated from the water and transferred to another vessel. The water is channeled back into the sea.
But the ship's never been tested, and many questions remain about how it will operate. For instance, the seawater retains trace amounts of oil, even after getting filtered, so the Environmental Protection Agency will have to sign off on allowing the treated water back into the Gulf.
``This is a no-brainer,'' Overton said. ``You're bringing in really dirty, oily water and you're putting back much cleaner water.''
The Coast Guard will have the final say in whether the vessel can operate in the Gulf. The owner, shipping firm TMT Group, will have to come to separate terms with BP, which is paying for the cleanup.
``I don't know whether it's going to work or not, but it certainly needs to be given the opportunity,'' Overton said.
Meanwhile along parts of the Gulf, red flags snapped in strong gusts, warning people to stay out of the water, and long stretches of beach were stained brown from tar balls and crude oil that had been pushed as far as 60 yards from the water.
Hurricane Alex churned up rough seas as it plowed across the Gulf, dealing a tough setback to cleanup operations. It made landfall along a relatively unpopulated stretch of coast in Mexico's northern Tamaulipas state late Wednesday, spawning tornadoes in nearby Texas and forcing evacuations in both countries. Alex weakened to a tropical storm Thursday morning as it moved across Mexico.
Although skimming operations and the laying of oil-corralling booms were halted across the Gulf, vessels that collect and burn oil and gas at the site of the explosion were still operating. Efforts to drill relief wells that experts hope will stop the leak also continued unabated.
In Florida, lumps of tar the size of dinner plates filled a large swath of beach east of Pensacola after rough waves tossed the mess onto shore.
Streaks of the rust-red oil could be seen in the waves off Pensacola Beach as cleanup crews worked in the rough weather to prepare the beach for the holiday weekend.
In Grand Isle, La., heavy bands of rain pounded down, keeping cleanup crews off the water and tossing carefully laid boom around. However, oil had stayed out of the passes.
``All this wave action is breaking up the oil very quickly,'' Coast Guard Cmdr. Randal S. Ogrydziak said. ``Mother Nature is doing what she does best, putting things back in order.''
Natural microbes in the water were also working on the spill. The result was a white substance that looked like mayonnaise, that washed up on some spots along the Grand Isle beach.
``People will be fishing here again,'' Ogrydziak said. ``It may take a while, but people may be surprised that it's not taking as long as they thought. Look at the (Ixtoc) oil spill in Mexico. It was massive and now people are back to using those waters.''
___
Associated Press writers Mary Foster in Grand Isle, La., Jay Reeves in Orange Beach, Ala., and Melissa Nelson in Pensacola Beach, Fla., contributed to this report.