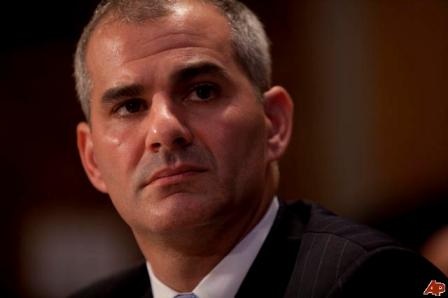 ASPEN, Colo. (AP) -- A top counterterrorism official this week defended the government's right to target U.S. citizens perceived as terror threats for capture or killing, citing the example of the renegade al-Qaida-linked cleric Anwar al-Awlaki. Michael Leiter, left, director of the National Counterterrorism Center, would not say whether al-Awlaki is on a U.S. targeting list, but a senior U.S. counterterrorism official has previously confirmed that the cleric is among terror targets sought to be captured or killed.
Speaking at the Aspen Security Forum, Leiter justified the targeting with ``all elements of U.S. national power'' those plotting to kill U.S. citizens.
The remarks amounted to a rare glimpse into the secret decision-making process among top U.S. counterterror officials who oversee drone missile strikes against terrorists in Pakistan and other battle zones abroad.
In its first year, The Obama administration has nearly doubled the use of airborne attacks in Pakistan's lawless frontier areas, where U.S. officials say al-Qaida chief Osama bin Laden is hiding.
Leiter also said that al-Awlaki had a ``direct operational role'' in the plot that allegedly sent Christmas Day bombing suspect Omar Farouk Abdulmutallab to attack a Detroit-bound airliner packed with nearly 300 passengers.
Acknowledging the hard choices involved in targeting someone to be killed, Leiter said such a decision ``certainly gives me pause.'' He added that President Barack Obama and CIA Director Leon Panetta also wrestle with similar deliberations ``to issue orders to end an individual's life.''
But he insisted the U.S. is well within its rights to defend itself.
``If someone like Anwar al-Awlaki is responsible'' for part of a plot ``to kill more than 300 people over the city of Detroit,'' Leiter said, ``I think it would be wholly irresponsible for citizens like me, Leon Panetta, Defense Secretary (Robert) Gates, and ultimately the president, not to at least think about and potentially direct all the elements of national power to try to defend the American people.''
CIA director Leon Panetta, speaking to ABC on Sunday, similarly would not confirm a kill order on Awlaki, but said Awlaki is on a CIA terrorist list.
Leiter pointed to the recent missile strike that killed Sheikh Saeed al-Masri, al-Qaeda's number three in command, as an example of the success of the drone strike program. Panetta was the first to confirm that killing this past weekend.
A woman in the crowd who identified herself as an American Civil Liberties Union member,m asked why there was no judicial review of such kill orders, citing the standard warrant requirements facing a policeman before entering a citizen's home.
Leiter explained that while ``a police officer does need a court order to go after a house,'' the lawman ``has a right of self defense if someone pulls out a gun.'' The U.S. government, Leiter insisted, has the same right. He added that there is congressional oversight of such actions.
Leiter also said that the government learned strong lessons after the failed Christmas Day bombing attempt in re-crafting its no-fly list, but added that officials still face a deluge of information each day in trying to prevent terror threats from boarding planes bound for the U.S.
Leiter's agency came under attack after the bombing for failing to ``connect the dots'' of information that would have identified Abdulmutallab as a terror suspect.
He said since the bombing, he set up new groups of analysts that led to a doubling of the no-fly list since Christmas Day. Leiter said as many as 400 suspects are being added every day to the watch list (also called the terror screening database), under new guidelines after the Abdulmutallab attack that lowered the threshold of how much intelligence it takes to rate someone as a threat.
Late last year there were about 3,400 names on the list, but in the wake of the Christmas Day airliner attack if grew to about 6,000, as authorities added names of people associated with al-Qaida groups in Yemen and Africa.
In a separate action Wednesday, the ACLU said it was preparing to file a lawsuit charging that the no-fly list has illegally kept innocent citizens or legal residents from traveling and violates their constitutional rights.
The lawsuit, which the group said would be filed in federal court in Oregon on behalf of 10 individuals, says the system of determining who should or should not be allowed to fly is broken, and has left people stranded as they traveled abroad.
Leiter appealed to the American public to trust his agency and others to protect their privacy while sharing that data between intelligence agencies.