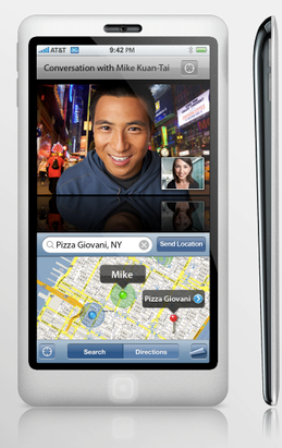 SEATTLE — First there's the anticipation. Then, the long lines, followed by the triumphant walk out of the Apple store, new gadget in hand.
Now, inevitably, the first slew of complaints are in, among them that just holding the iPhone 4 a certain way can interfere with calls.
The Skanner News video here

Apple Inc. redesigned the fourth generation of its smart phone, replacing sloping edges with a stainless steel band that wraps around the more squared-off sides. The metal band acts like a sturdy skeleton for the delicate phone, and it does double duty as the device's antenna.
The iPhone 4 went on sale Thursday morning in the U.S., the U.K., France, Germany and Japan. Within hours, some early buyers posted messages on Apple's customer support website, complaining that gripping the gadget in ways that covered small black lines in the steel band could cause the number of "bars" — the indicator of call signal strength — to plummet.
Some people said the iPhone 4 would disconnect mid-call when the phone was nestled in their hands in such a way that the lower-left corner of the device was covered.
While some iPhone owners reported no problems at all, others say the issue is intermittent: "It's only every once and a while," Lawrence Ho, 27, said outside the Apple store on New York's Fifth Avenue on Friday.
In the U.S., this issue will be piled on top of existing iPhone service complaints. AT&T Inc. is the only carrier in the U.S. with the iPhone, and its wireless network hasn't been able to keep up with growing demand for the gadget. In big cities especially, iPhone users complain of frequent dropped calls.
Natalie Kerris, an Apple spokeswoman, called such problems "a fact of life for every wireless phone."
She recommended avoiding holding the iPhone 4 in ways that block the black line, or buying a case for the phone. Apple sells a "bumper," which covers the sides of the iPhone, for $29. The other case available from Apple's online store is a leather wallet that costs $130.
Shaw Wu, an analyst for Kaufman Bros., said in a research note Friday that he doesn't believe the antenna problem will warrant a recall.
"Most users have a case anyway to protect their iPhone," he wrote.
AP videojournalist Ted Shaffrey in New York contributed to this report.