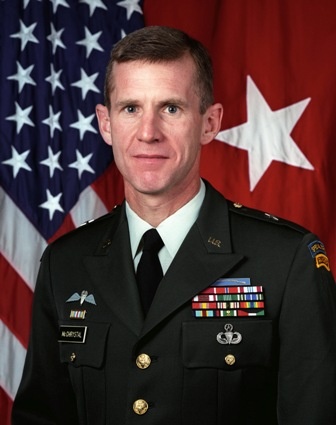 KABUL, Afghanistan — Afghan officials said Wednesday that firing Gen. Stanley McChrystal would disrupt progress in the war and could jeopardize a pivotal security operation under way in Taliban strongholds in the south.
Editors at Rolling Stone say they are "astonished" by the impact of their profile on McChrystal. Watch video here.

At the end of a one-hour video conference Tuesday night with President Barack Obama, Afghan President Hamid Karzai expressed his confidence in the top NATO commander in Afghanistan, Karzai spokesman Waheed Omar said.
McChrystal was summoned to Washington to explain disparaging comments published in Rolling Stone magazine that he and his top aides made about Obama's national security team.
While McChrystal, who met with Obama on Wednesday, was harshly scolded by his superiors in the United States, officials in Afghanistan rallied to his support, saying he had increased cooperation between Afghan and international troops, worked to reduce civilian casualties and gained the trust of the Afghan people.
"The president believes that we are in a very sensitive juncture in the partnership, in the war on terror and in the process of bringing peace and stability to Afghanistan, and any gap in this process will not be helpful," Omar told reporters.
"We hope there is not a change of leadership of the international forces here in Afghanistan and that we continue to partner with Gen. McChrystal."
Taliban spokesman Zabeehullah Mujahid, however, said McChrystal should resign because his strategy had "clearly failed."
"The problems between American leaders over Afghan issues very clearly show that the policy and the strategy of America has failed," he said. "They cannot win this war because the Afghan nation is united and they are committed to defeating American forces in Afghanistan."
The controversy erupted as June is on track to becoming one of the deadliest months for U.S. and international forces in the nearly nine-year Afghan war.
The military announced six more NATO deaths Wednesday — three of them Americans. The three other service members were not identified by nationality, but NATO said all died in the south — two in a bomb attack and one in a firefight.
That makes 73 international forces killed so far this month. Forty-four of them were Americans.
The deadliest month of the conflict for U.S. forces was October 2009, when 59 service members were killed. For NATO forces overall, the deadliest month was July 2009, when 75 troops were killed.
The violence is also hitting Afghans. A vehicle belonging to a candidate for parliament hit a roadside bomb early Wednesday in the east, killing the candidate's brother. The candidate was wounded but survived, said Ghafoor Khan, a police spokesman in Nangarhar province.
In Uruzgan province, seven private security guards were killed Wednesday when their vehicle hit a roadside bomb in Chora district, said deputy provincial police chief Gulab Khan. The Taliban claimed responsibility for the deaths of the guards, who were providing security for a construction company that was building a road in the area.
The flap over McChrystal comes as NATO and Afghan forces are ramping up security in and around the key southern city of Kandahar, the birthplace of the Taliban.
Karzai's younger half brother, Ahmad Wali Karzai, the head of the Kandahar provincial council, gave McChrystal a ringing endorsement, telling reporters in Kandahar that McChrystal's leadership would be sorely missed.
"If he is fired, it will disrupt the operation," Ahmad Wali Karzai said. "It definitely will affect it. He (McChrystal) started all this, and he has a good relationship with the people. The people trust him and we trust him. If we lose this important person, I don't think that this operation will work in a positive way."
In Kabul, Afghan Defense Ministry spokesman Gen. Mohammad Zahir Azimi also publicly voiced his support for the general, who is prepared to submit his resignation to Obama, according to two military officials. They spoke on condition of anonymity because they were not authorized to speak publicly about the issue.
"Since Gen. McChrystal took over the job as commander of the international forces, there have been a lot of changes in different departments, which are very important and positive," Azimi said. "For example, there has been a decrease in the numbers of civilian casualties and we're still working jointly with McChrystal to decrease it further."
Azimi spoke at a regular news conference held with Brig. Gen. Josef Blotz, spokesman for the NATO command in Kabul. Blotz declined to discuss McChrystal's fate or the magazine article, which reported deep rifts between the top commander in the war and the U.S. administration.
"Let us be a little bit more patient," Blotz said.

Associated Press writers Amir Shah and Rahim Faiez in Kabul and Mirwais Khan in Kandahar contributed to this report.