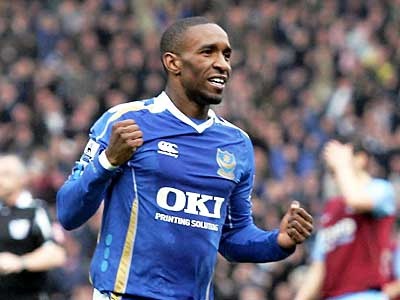 PORT ELIZABETH, South Africa — A revived England made the round of the 16 at the World Cup on Wednesday, beating Slovenia 1-0 on Jermain Dafoe's goal in the 23rd minute.


The victory gave England second place in Group C, behind the United States, which beat Algeria 1-0. Slovenia entered the day the surprise leader in the group but finished with four points to five for the U.S. and England.

Watch video of the Algeria win here.
Playing far more aggressively than they did in draws with the Americans and Algerians, the English went ahead when Defoe put in James Milner's cross from five yards out with a right-footed shot.
Now a squad that was among the pre-tournament favorites can take a breath, having moved on and avoided a humiliating early exit.
"This team, this spirit, played together and tried together," England coach Fabio Capello said. "I am really happy because I found the team I know. We now go forward. We can play against all the teams because the mind is now free."
England continued to dominate after the goal, and Slovenia goalkeeper Samir Handanovic had to make two saves within a few seconds of each other to stop shots from Defoe and Steven Gerrard.
Frank Lampard, Wayne Rooney and Glen Johnson also had shots on goal.
Bad defense by Slovenia handed Defoe another chance in the opening minute of the second half, but he flicked the ball wide off Gareth Barry's headed pass.
Slovenia's best chance to tie the game came in the 68th minute after Barry lost possession and Terry and Johnson blocked shots from Zlatko Dedic and Milivoje Novakovic.
"It's been difficult for the supporters because they weren't happy with the performances," Defoe said. "A lot of the top teams have struggled so it was important to keep the spirit, which we have done."