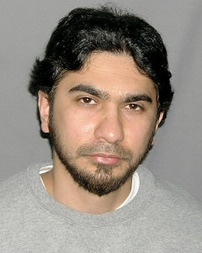 NEW YORK – A Pakistan-born U.S. citizen pleaded guilty to trying to bomb Times Square and says he is "part of the answer to the U.S. terrorizing the Muslim nations and the Muslim people."
Faisal Shahzad defiantly made the statement in federal court Monday as he pleaded guilty to a 10-count indictment charging him in the failed bombing.

Watch video here
He also says he actually tried to set off three separate bombs in an SUV parked near a Broadway theater May 1 to injure and kill people but that all three failed to ignite. The Bridgeport, Conn., resident was arrested two days later.
Shahzad said he was trained by the Pakistan Taliban in Pakistan in late December and early January before he returned to the United States in February to build his bomb.
Sentencing is Oct. 5.
THIS IS A BREAKING NEWS UPDATE. Check back soon for further information. AP's earlier story is below.
NEW YORK (AP) — A Pakistan-born U.S. citizen pleaded guilty Monday to carrying out the failed Times Square car bombing, saying he wanted it known that unless the U.S. stops attacking Muslim lands, "we will be attacking U.S."
Faisal Shahzad, 30, entered the plea in U.S. District Court in Manhattan just days after a federal grand jury indicted him on 10 terrorism and weapons counts, some of which carried mandatory life prison sentences.
Shahzad made the plea and an accompanying statement as U.S. District Judge Miriam Goldman Cedarbaum began asking him a lengthy series of questions to ensure he understood his rights. She did not immediately accept the plea.
Cedarbaum asked Shahzad if he understood he might spend the rest of his life in prison. He said he did.
At one point, she asked him if he was sure he wanted to plead guilty.
He said he wanted "to plead guilty and 100 times more" to let the U.S. know that if it did not get out of Iraq and Afghanistan, halt drone attacks and stop meddling in Muslim lands, "we will be attacking U.S."
The Bridgeport, Conn., resident was arrested trying to leave the country May 3, two days after a gasoline-and-propane bomb failed to ignite in an SUV parked near a Broadway theater.
Authorities said Shahzad immediately cooperated, delaying his initial court appearance for two weeks as he spilled details of a plot meant to sow terror in the world-famous Times Square on a warm Saturday night when it was packed with thousands of potential victims.
The bomb apparently sputtered, emitting smoke that attracted the attention of an alert street vendor, who notified police, setting in motion a rapid evacuation of blocks of a city still healing from the shock of the Sept. 11, 2001, terrorist attack on the World Trade Center.
According to the indictment issued last week, Shahzad received a total of $12,000 prior to the attack from the Pakistani Taliban through cash drop-offs in Massachusetts and Long Island.
Attorney General Eric Holder said the Pakistani Taliban "facilitated Faisal Shahzad's attempted attack on American soil."
Shahzad was accused in the indictment of receiving explosives training in Waziristan, Pakistan, during a five-week trip to that country. He returned to the United States in February.
The indictment said he received $5,000 in cash on Feb. 25 from a co-conspirator in Pakistan and $7,000 more on April 10, allegedly sent at the co-conspirator's direction.
Shahzad, born in Pakistan, moved to the United States when he was 18.
Pakistan has arrested at least 11 people since the attempted attack. An intelligence official has alleged two of them played a role in the plot. No one has been charged.
Three men in Massachusetts and Maine suspected of supplying money to Shahzad have been detained on immigration charges; one was recently transferred to New York.
Federal authorities have said they believe money was channeled through an underground money transfer network known as "hawala," but they have said they doubt anyone in the U.S. who provided money knew what it was for.