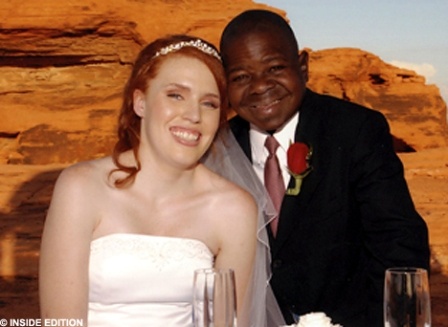 SALT LAKE CITY (AP) -- New details surrounding TV actor Gary Coleman's death have emerged with his attorney saying the child star of ``Diff'rent Strokes'' and his wife divorced in 2008, and Utah authorities releasing a tape of her frantic emergency call after he struck his head in a fall.
Coleman died from a brain hemorrhage Friday, two days after the 911 call. He was taken off life support, but it's not clear who made that decision.
Coleman's attorney Randy Kester said he does not know.
``Now issues are being raised about whether or not Shannon had authority to terminate the life support,'' he said Wednesday.
A spokeswoman with Utah Valley Regional Medical Center told AP she cannot release any additional information about Coleman's death.
Kester told The Associated Press that Coleman and Shannon Price divorced in August 2008 and Coleman never told him the two had remarried.
``Gary shared a lot of things with me,'' Kester said. ``That's probably something he would have told me.''
Utah divorce decree documents list only a John Doe and Jane Doe as parties, but the last page lists Price's name and address, saying a copy of the decree was mailed to her. The decree is dated Aug. 12, 2008. The couple wed in August 2007 after meeting on the set of the 2006 comedy ``Church Ball.''
Kester said he is not aware of a will for Coleman and that the two discussed the need to meet and work on one as recently as four or five weeks ago.
A message left for a representative for Shannon Price was not returned Wednesday.
Price refers to Coleman has her husband in the emergency call recording from May 26, also released Wednesday.
Price can be heard asking a Utah emergency dispatcher to send help for Coleman, who was bleeding from the back of his head and ``bubbling at the mouth'' after falling at his Santaquin home, about 55 miles (89 kilometers) south of Salt Lake City.
``I just don't want him to die,'' Price tells the female dispatcher during the nearly six-minute call. ``I'm freaking out like really bad.''
Price said she's not sure whether Coleman had a seizure or whether he hit his head and fell. She said he had just gotten home and was going downstairs to make some food for her and that she then heard a ``big bang.''
``Send someone quick because I don't know if he's like gonna be alive cause there's a lot of blood on the floor,'' Price said.
Coleman's short stature of 4-foot-8 (163-centimeters) stemmed from kidney problems and required at least two transplants earlier in his life and dialysis. Late last year, he had heart surgery complicated by pneumonia, Kester has said. In February, he suffered a seizure on the set of ``The Insider.''
Coleman was conscious at the hospital that day but slipped into unconsciousness Thursday and was taken off life support Friday with family at his side.
A Santaquin police report released Wednesday largely reflects what Price says in the call. The report says an officer who arrived at the house asked Coleman if he could say what happened.
``He looked at me and stated that he could not remember,'' the report says.
The report says that, with assistance, Coleman was able to walk out of the home and into the garage where a gurney was waiting.
In February -- on his 42nd birthday -- Coleman pleaded guilty to a misdemeanor criminal mischief charge related to a domestic violence call in April 2009. In exchange, the original charge of domestic violence assault was dropped. Coleman and Price had an argument that got out of hand, Kester said.
Coleman was sentenced to 31 1/2 days in jail but was to serve the time only if he failed to complete a domestic violence course and pay a $595 fine.
In December 2008, Coleman pleaded no contest to a disorderly conduct charge stemming from an incident in a bowling alley parking lot three months earlier and was ordered to pay a $100 fine.
A personal injury lawsuit against Coleman and Price related to the same incident was settled. Colt Rushton accused Coleman of hitting him with his truck after an altercation over photos.
The couple appeared on ``Divorce Court'' in 2008 to try to work out marital problems.
Funeral services are planned in Salt Lake City this weekend.
Coleman starred for eight seasons on the sitcom ``Diff'rent Strokes,'' starting in 1978. The tiny 10-year-old's ``Whachu talkin' 'bout?'' was a staple in the show about two African-American brothers adopted by a wealthy White man. Coleman played Arnold Jackson, the younger of the two brothers.