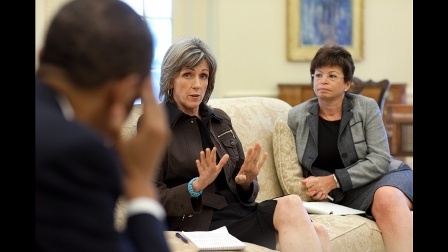 President Barack Obama is briefed by Carol Browner, assistant to the President for energy and climate change, on the response to the BP oil spill in the Gulf of Mexico, during a meeting in the Oval Office, June 1. Senior Advisor Valerie Jarrett is pictured at right. (Official White House Photo by Pete Souza)

PITTSBURGH — President Barack Obama pressed Congress to scrap billions in oil company tax breaks and pass legislation to help the nation kick a dangerous "fossil fuel addiction" Wednesday, trying to channel disgust over the worsening oil disaster into a force for clean energy.
Seeking opportunity in a crisis, Obama argued for action in Congress as crews struggled into a seventh week to contain BP's mangled oil well in the Gulf of Mexico. He urged lawmakers to shift the tax-break money toward clean-energy research and approve a major energy bill, now stalled in the Senate, that would slap a price on carbon emissions.
"Our continued dependence on fossil fuels will jeopardize our national security," he declared. "It will smother our planet. And it will continue to put our economy and our environment at risk."
Among the costs, Obama said in a speech at Carnegie Mellon University, is the risk that comes with drilling deep below offshore waters to find oil. He received sustained applause when he said, "We have to acknowledge that an America that runs solely on fossil fuels should not be the vision that we have for our children and grandchildren."
Obama's tough words about Big Oil came as he and oil giant BP face growing unhappiness from a public watching the disaster unfold day by day. What started with an oil rig explosion on April 20 has become the worst spill in U.S. history, with oil reaching shorelines and still gushing with no permanent fix in sight.
The Justice Department is investigating, and Vice President Joe Biden said Wednesday of BP: "My guess is that there are all kinds of discussions about whether or not they pushed the envelope with the rig operator beyond what it should be pushed to safely pursue." Biden, in a pretaped interview for Charlie Rose's PBS talk show, said that if any civil or criminal violations are found "they will be pursued to the extent of the law."
The president tried to tap into the discontent and use it as an urgent call for legislative action.
"If we refuse to take into account the full cost of our fossil fuel addiction — if we don't factor in the environmental costs and national security costs and true economic costs — we will have missed our best chance to seize a clean energy future," he said.
Obama faces serious difficulties in pushing for the bill he wants — a shrinking legislative window in a divisive election year, the distracting nature of the oil spill crisis itself and the contentious idea of putting a price on carbon pollution.
The House last year narrowly passed legislation creating a system, known as "cap and trade," to limit global warming emissions and auction allowances to polluters. A bipartisan effort on a different version of climate and energy legislation in the Senate has been in the works for months but has no clear path ahead.
The president offered his most determined promise to date.
"The votes may not be there right now, but I intend to find them in the coming months," Obama declared.
He added, "The next generation will not be held hostage to energy sources from the last century."
Tucked in there was a reminder from the president that he does support more offshore drilling at home. Indeed, Obama was viewed by environmentalists as proposing giveaways to the oil industry when he announced a limited expansion of offshore drilling in March.
Since the Gulf explosion, Obama has pulled back on some of those plans and ordered an investigation into the spill. In his speech, he made sure to say that any new drilling would be just one part of an energy strategy, and only as a short-term bridge toward a clean energy economy.
Obama has consistently championed alternative energy sources and adopted energy efficiency programs and standards for cars and homes.
The president has been getting increasingly aggressive in his proposals to raise taxes on oil companies since taking office last year.
But he had little success before the BP oil spill.
Obama proposed about $31 billion in tax increases on oil and gas companies in his first budget proposal, released shortly after taking office. After none were enacted, he proposed nearly $37 billion in tax increases in the budget plan he released in February.
Congress showed no appetite for the tax increases until the House passed a bill last week that would increase the per barrel tax on oil from 8 cents to 34 cents to help finance a federal fund to clean up spills in the nation's waterways. That tax hike, now before the Senate, would raise nearly $12 billion over the next decade.
Overall, Obama's economic speech struck a deeply partisan tone as a potentially pivotal midterm election looms in November. He repeatedly sought to frame Democrats as the party in favor of reshaping the economy and holding powerful interests accountable, while he cast Republicans as trying to obstruct him by saying no.
Here, too, Obama tried to connect with people struggling with economic insecurity — and perhaps likely to blame the party in power, Democrats. He contended that Democrats see the value of a safety net while Republicans favor such little government help that they leave people "on their own."
Ben Feller reported from Washington. Associated Press writers Stephen Ohlemacher and Erica Werner contributed to this story from Washington.