Cyril Josh Barker Special to the NNPA from the Amsterdam News
Published: 24 May 2010 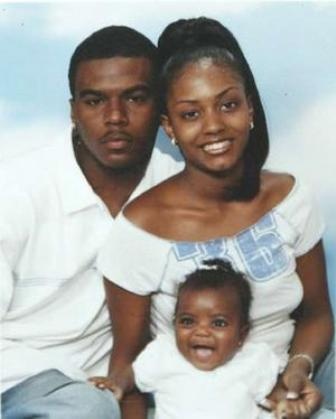 (NNPA) - Rainy conditions didn't stop crowds of people from attending the ceremony to rename a street in Queens after the late Sean Bell. Liverpool Street, between 94th Avenue and 101st Street, will now bear the name of "Sean Bell Way." The street is significant in that it is the location where Bell was shot and killed in November 2006 in a hail of 50 bullets at the hands of the NYPD before his wedding day.

Sean Bell, his fiance, Nicole, and their baby


Community residents and leaders gathered May 18 at the intersection of 94th Avenue and Liverpool Street where a stage was set up. Throughout the event, musical acts consisting of local artists performed tributes to Bell on what would have been his 27th birthday.
At around 6 p.m., the crowd gathered around the light post that bears the Liverpool Street sign to reveal the new Sean Bell Way sign underneath. City Council Members Leroy Comrie and Thomas White Jr. sponsored the legislation for the street renaming that was signed into law last December.
"By renaming a street after Sean Bell, we are creating a symbol for the community, one that will last through the generations, not only serving as a reminder of what happened on that fateful night, but also of what arose out of the ashes of the tragedy," said White.
Comrie said that the Bell family came to him with the idea for the street renaming as an opportunity to memorialize Bell. It also serves as a reminder to the city and the NYPD to improve on community-police relations.
"Too often, tragic incidents like this occur every generation and are soon forgotten over time," Comrie said. "I believe that we can use this renaming as a teaching tool to future generations. The residents of this street, the members of Queens Community Board No. 12 and Sean's family are in agreement that this is the best way we can truly memorialize this tragedy."
Bell's fiancée, Nicole Paultre- Bell, said that while it was a long road to get the street renamed, it was fitting to hold the event on Bell's birthday and that it is helping as she continues with her emotional healing. Bell left behind two young daughters when he was killed.
She said, "I have to stare at it because I can't believe it. It's a good thing for my daughters to see that, with all the negativity around, something good can come out of this. When everyone walks down this block, even when we are dead and gone, people will always remember who Sean Bell was."
The Rev. Al Sharpton has been supporting the Bell family since the fatal shooting and was on hand at Tuesday's event. Sharpton said the street sign serves as a chilling but helpful reminder.
"We want every time somebody rides down this block to know what happened," he said. "They will know that there was a young man who wanted to do the right thing and we are going to fulfill his dream."
City Councilman Charles Barron said that while the street renaming is a step in the right direction, the Bell family has yet to receive justice for their loss. The three officers charged in Bell's killing were acquitted in April 2008.
"We have to keep on struggling," he said. "I'm glad for the family, their heart is feeling good, and for that, this is a great day. The bottom line is that we are all Sean Bell. These killers are still walking around this city and the government has not brought them to justice. So until that time, we are all in danger."
The civil trial in the Bell case will begin on July 20.