By Kevin Mcgill for The Skanner News
Published: 08 May 2010 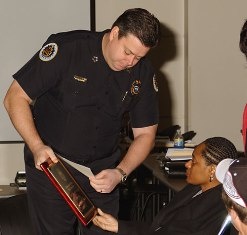 PHOTO: Chief Ronal Serpas presents the 2006 Officer of the Year award to Police Officer Danita Marsh who was shot and seriously wounded while helping a victim of domestic violence.

Mayor Mitch Landrieu made the announcement Thursday, a day after asking the U.S. Justice Department to send a team to help reorganize a department under several federal investigations. Most notably, US authorities are looking into the shooting deaths of unarmed civilians in the days after Hurricane Katrina in 2005. Four former officers have pleaded guilty in a cover-up of the shootings and the investigation is continuing.
"I'm completely confident that Mayor Landrieu is going to turn that city around and I want to be part of that," Serpas said during a news conference in Nashville.
Serpas, a third-generation police officer, was a high-ranking member of the New Orleans department when he left in 2001 to become chief of the Washington State Patrol. He took over in Nashville in January 2004. Landrieu and Nashville Mayor Karl Dean both said Thursday that Nashville experienced an annual drop in crime each year after Serpas' arrival.
Landrieu had hoped for Serpas to start immediately but approved of him staying in Nashville for a few days as that city recovers from floods that killed nine and cause more than $1 billion in damage.
"It is ironic," said Landrieu, who took office Monday in a city still recovering from Katrina's floods.
He said Serpas is familiar with the city's unique, diverse culture but far enough removed from the department to be untainted by its current scandals.
"Having been gone for 10 years, the experience he has in the department actually is an asset," Landrieu said.
Serpas takes over from Warren Riley, who resigned Monday with the advent of a new administration. His selection comes at a time when black political power in the New Orleans post-Katrina has waned, although the city remains majority black. Landrieu, elected in a cross-racial landslide in February, is the first white mayor since his father, Moon Landrieu, left office in 1978.
Surrounded by members of the multiracial task force that helped him choose a chief, Landrieu acknowledged the likelihood that many black New Orleans residents would have liked to see a black chief.
"Of course, I struggled with that issue," Landrieu said. But he said Serpas came with high recommendations from interdenominational ministers groups in Nashville and New Orleans who praised the chief's efforts to improve police relations with African-Americans.
And he said a black chief from outside New Orleans would not necessarily understand unique elements of New Orleans' culture.
"You could choose a person that was African-American that perhaps did not know what a Mardi Gras Indian was," Landrieu said, referring to groups of black men who don spectacular outfits of beads and feathers to dance and march during the city's annual Carnival celebration.