Guards Not Charged in Beating Death of Martin Lee Anderson, 14

Special to the NNPA from the Afro-American Newspapers
Published: 27 April 2010 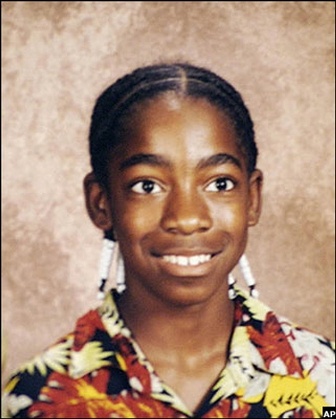 WASHINGTON (NNPA) - Federal officials will not file charges against seven guards and a nurse in the Florida boot camp death of 14-year-old Martin Lee Anderson.
Anderson died on Jan. 6, 2006, a day after he was attacked by the guards, while the nurse looked on. The entire incident was caught on videotape.
The video showed the seven guards punching and kicking Anderson, pushing ammonia capsules into his nose and dragging his body around the camp's yard.
The eight people involved were acquitted of manslaughter charges by an all-White jury in 2007, but Florida closed all boot camps for juvenile offenders in the aftermath.
Officials from the Justice Department say that after an extensive investigation, there was insufficient evidence to file charges. "Under the applicable federal criminal civil rights laws, prosecutors must establish, beyond a reasonable doubt, that an official 'willfully' deprived an individual of a constitutional right, meaning that the official acted with the deliberate and specific intent to do something the law forbids," the Justice Department said in a press release. "Neither accident, mistake, fear, negligence nor bad judgment is sufficient to establish a federal criminal civil rights violation."
Despite the ruling, Anderson's family says they will continue to fight for justice.
"It's not over," Gina Jones, Anderson's mother, told the Associated Press. "It's not closed and I'm going to make sure it stays open. That was my baby. There was no reason to be beaten like that."
Ben Crump, the attorney representing Anderson's parents said the family will travel to Washington, D.C. to speak U.S. Attorney General Eric Holder. Only Holder or President Obama can allow charges to be pursued.
"We need our civil rights division to give people faith in the system that there is equal justice for everybody," Crump told the Tallahassee Democrat. "The people are just so desperate to believe in our system.
"If there was ever one time we thought that they were going to hold the system accountable for killing a loved minority, it was this."
A lawsuit filed by Anderson's parents against Florida and Bay County resulted in a $7.4 million settlement.