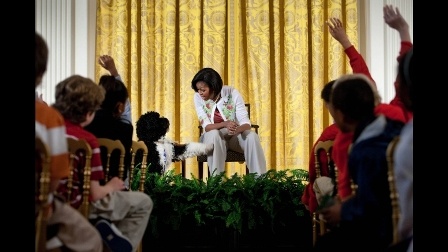 Michelle Obama speaks with children of White House employees Thursday, April 22, which was Bring Your Kids to Work Day. The family dog, Bo, accompanied her as she answered children's questions.

CHICAGO (AP) -- More than a decade after it began, take-your-kid-to-work day appears to be losing steam. Now it's keep-your-kid-in-school.
Thursday marked the 17th year for Take Your Daughters and Sons to Work Day. But some school districts sent strongly worded letters or e-mails to parents explaining that taking a child to work would put the youngster's education at risk.
Many teachers found their Thursday classes largely unaffected.
"We had only six out today - that's actually less than usual," said Darrell Propst, principal of Taylor Road Elementary School in Reynoldsburg, Ohio, who asked parents not to pull their kids out of school. "Our attendance was very, very good today."
Though many kids still accompany a parent to work, some employers say the event increasingly conflicts with high-stakes standardized testing in schools. And this year, it was overshadowed by Earth Day, which celebrated its 40th anniversary on Thursday.
In Texas - at Dell Inc. in Austin and Southern Methodist University in Dallas - most of the focus was on Earth Day, not Take Our Daughters and Sons to Work Day.
"I haven't heard about that in a while," SMU spokesman Kent Best said. "It was a big deal maybe a decade ago. ... So today is the day?"
Travis Carter, a public relations executive in Dallas who has two children, ages 5 and 6, said his kids reminded him it was Earth Day and took their recyclables to school.
"I am surprised to now hear that it's also take-your-kids-to-work day," he said.
The event was launched in 1993 and has always fallen on the fourth Thursday in April. But that date has drawn complaints from school administrators for well over a decade, especially because many standardized tests fall on or near the same day.
Some school officials have contacted the Take Our Daughters and Sons to Work Foundation to ask that the event be held on a school holiday or during the summer, but the organization won't budge.
In Illinois, where state lawmakers have gone so far as to encourage companies to invite employees' children during the summer, a letter sent home with kids in one suburban Chicago district was paying off.
"In the elementary schools, we had 200 kids out" because of parents taking them to work, said Lynn Brandl, spokeswoman for Hawthorn School District 73. "That's about half of what it was last year."
In Phoenix, the superintendent sent out a letter telling students that missing time from school, even one day, means "his or her learning achievement suffers." Officials said a sampling of schools showed no significant drop in attendance.
"We see results with the letter," said Sandi Hicks, spokeswoman for the Deer Valley Unified School District, which has sent out a version of the letter for seven years.
Some companies said they do not participate in the formal national program because they host other career-oriented options for schoolchildren that they think are more appropriate.
But others said they agreed to move their events to another day after complaints that the event was disrupting the academic year.
"Our companies are quite cooperative and agreed to move (their events) to the third week in June," said Susan Carlson, executive director of the Arizona Business & Education Coalition.
But others stuck to the original date, including First Lady Michelle Obama, who spent about an hour Thursday taking questions from children of executive office employees.
In Florida, where some educators still enthusiastically support the day, Honeywell Aerospace hosted an event at its Clearwater facility, just as it has done for years.
A company spokeswoman said there's been no suggestion that the event be rescheduled, and there's been no drop-off in attendance. "It's about 350 kids, and it's been about 350 kids every year," said Karen Crabtree.
Some parents who brought their children to work didn't understand what all the fuss was about. One mother said the value of learning about the working world easily justified skipping a day of school.
"We were actually involved in a global town hall meeting where the CEO was talking about the company and the good things that we do as an organization," Alicia Agugliaro said after bringing her 7-year-old daughter to the drug-development company in Princeton, N.J., where she works in marketing communications.
Her daughter "really paid attention" to the presentation.
"She saw how we are bringing medicine to market sooner and how it affects people's lives," Agugliaro said.
While unemployment remains high in many parts of the U.S., Susan Murphy of the National Human Resources Association said she has not seen any decline in participation, though but some companies have stopped distributing things like shirts and other freebies.
Participation in this year's program was not immediately known, and it may take a few months before attendance figures are compiled, said George McKecuen of the Take Our Daughters to Work Day Foundation.
But, he said, the event remains popular, with about 18 million kids participating each year between 2005 and 2009.
He acknowledged that participation had fallen fairly dramatically before 2004, when the event, which had for years been just for girls, was expanded to include boys. In 2001, for example, the 10.5 million girls who participated was more than 5 million fewer than the number who took part just two years earlier.
---
Associated Press Writer Linda Stewart Ball in Dallas contributed to this report.