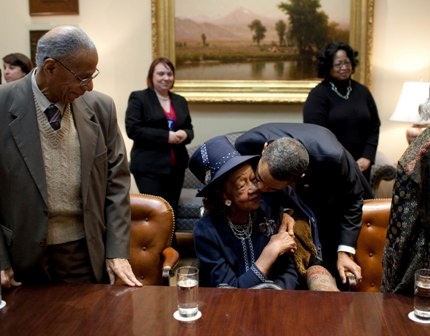 Today, the nation lost one of the foremost leaders of the Civil Rights Movement and the social work profession. Dr. Dorothy I. Height was a renowned civil rights leader and a vital force in the struggle for human rights and equality in the United States for more than half a century. She most recently presided as chair and president emerita of the National Council of Negro Women, a position she held for more than 40 years.
A proud social worker, Dr. Height earned her graduate degree at the New York University School of Social Work and began her career as a caseworker in the New York Welfare Department. Dr. Height went on to hold several leadership positions with the Young Women's Christian Association (YWCA), where she led a national campaign to integrate all YWCA facilities.
Her tireless efforts on behalf of others exemplified the social work commitment to social justice and advocacy. In 2009, the Dorothy I. Height and Whitney M. Young, Jr. Social Work Reinvestment Act was introduced into the 111th Congress by U.S. Senator Barbara Mikulski (MD) and U.S. Representative Edolphus Towns (NY). The bill would create a national commission to study the impact of social work interventions and fund social work training and research grants.
When the Social Work Reinvestment bill was introduced in Congress, Dr. Height said, "We take social work and social workers for granted. Social workers know firsthand what the issues are. We are prepared, but we also need support to keep contributing. What we need are more people with skill and commitment to help us deal with the nation's problems and to help us move forward. The proposed Social Work Commission provides a way for us to do just that—move forward."
"Words cannot express our sorrow in learning about Dr. Height's death this morning, says Elizabeth J. Clark, PhD, ACSW, MPH, executive director of the National Association of Social Workers. "She, like pioneer social workers Jane Addams and Frances Perkins, made lasting change in the lives of thousands, while shaping some of the most important social shifts in American history."
Dr. Height was mentored by some of the most accomplished women of the Progressive Era, including Mary McLeod Bethune and Eleanor Roosevelt. And she mentored many of the nation's most recognizable female leaders today, including Former Secretary of Labor Alexis Herman, Secretary of State Hillary Clinton, media mogul Oprah Winfrey and poet laureate and author Dr. Maya Angelou. Dr. Height also remains the longest serving president (1947-1957) of Delta Sigma Theta Sorority, an international public service organization.
The vast scope of Dr. Height's many accomplishments has earned her repeated national recognition. In 1989, President Ronald Reagan presented her with the Citizens' Medal Award and in 1997 President Bill Clinton awarded her the Presidential Medal of Freedom. In 2004, President George W. Bush awarded her with the Congressional Gold Medal and she was inducted into the Democracy Hall of Fame. Most recently, Dr. Height served as an advisor to President Barack Obama and First Lady Michelle Obama.
Dr. Height's legacy will be celebrated by the social work profession later this week at the 2010 Social Work Congress (April 22-23). She is the recipient of NASW's 2009 Lifetime Achievement Award.