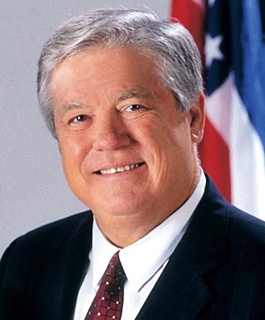 JACKSON, Miss. (AP) -- Mississippi Gov. Haley Barbour drew criticism for proclaiming April as Confederate Heritage Month without mentioning slavery, the second governor this month to come under fire for the omission.
Rep. Robert Johnson, D-Natchez, who is black, said Monday that people need to learn about the "abhorrent, violent, depraved actions of slavery."
Virginia's Republican governor, Bob McDonnell, also named April as Confederate History Month but his original proclamation didn't mention slavery. After coming under national criticism, McDonnell last week revised it to denounce slavery as "evil and inhumane."
Barbour, also a Republican who helped campaign for McDonnell last year, said Sunday on CNN that slavery was bad but a fuss over McDonnell's original proclamation "doesn't amount to diddly."
Barbour's office on Monday did not respond to a request by The Associated Press for a copy of his 2010 Confederate Heritage Month proclamation. The Rev. Cecil Fayard, chaplain in chief for the national Sons of Confederate Veterans, faxed a copy to AP.
The proclamation, signed March 15, said it is "important for all Americans to reflect upon our nation's past to gain insight from our mistakes and successes."
Fayard said he agrees with Barbour's proclamation, which called on Sons of Confederate Veterans and other groups to publicize the "rich heritage" of the Confederacy.
"The War Between the States was fought for the same reasons that the tea party movement today is voicing their opinion. And that is that you have large government that's not listening to the people, there's going to be heavy taxation," Fayard said Monday from his home in Duck Hill, Miss. "And the primary cause of the war was not slavery, although slavery was interwoven into the cause, but it was not the cause for the War Between the States."
Mississippi's declaration of secession before the Civil War said: "Our position is thoroughly identified with the institution of slavery -- the greatest material interest of the world. Its labor supplies the product, which constitutes by far the largest and most important portions of commerce of the earth. These products are peculiar to the climate verging on the tropical regions, and by an imperious law of nature, none but the black race can bear exposure to the tropical sun. These products have become necessities of the world, and a blow at slavery is a blow at commerce and civilization."
Johnson said his hometown, in southwestern Mississippi, has long had a Confederate pageant as part of its twice-a-year pilgrimage tours of antebellum homes. He said in the past few years, Natchez has started to present a more balanced view of history, with a marker placed at Forks of the Road, once one of the largest slave markets in the South.
Still, Johnson said he has often heard White people say that Black people should forgive what happened in the past.
"If they want us to forget and forgive, why don't they stop reminding us of what the Confederacy was?" Johnson said.