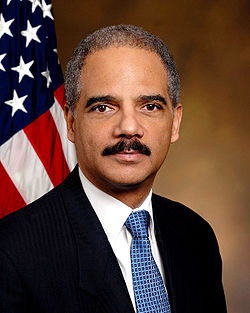 RALEIGH, N.C. (NNPA) - Eric Holder, the attorney general of the United States, is one of several history-making notables who is slated to address the Student Nonviolent Coordinating Committee (SNCC) 50th Anniversary Conference when it meets in Raleigh next month.
Holder, the first African-American U.S. attorney general in history, is scheduled to speak on Saturday, April 17, sources confirm, at First Baptist Church in Raleigh.
He is expected to address the relevance of the 1960s civil rights struggle, and President Obama's efforts to not only enforce, but strengthen the protections that it produced.
The SNCC (pronounced "Snick') 50th Anniversary Conference, scheduled to be headquartered at Shaw University in Raleigh April 15-18, commemorates the student-led civil rights movement that emerged in April 1960 after the groundbreaking February 1960 Greensboro Woolworth sit-ins ignited Black college student activism against racial segregation all across the South.
Organized by Ella Baker, a Shaw University alumna and Southern Christian Leadership Conference official then, hundreds of students, representing 56 colleges and high schools from at least 12 Southern states like Tennessee, Georgia, and of course, North Carolina, came together at Shaw and Raleigh's Memorial Auditorium, to strategize and network on how to peacefully confront racially discriminatory Jim Crow laws, and bring about voting rights protection for disenfranchised African Americans in the South.
In the short period that it was active, the SNCC grassroots movement of black, and eventually white student activists, is credited with bringing about courageous black voter registration efforts in some of the poorest, and most dangerous parts of the South.
Historians credit the SNCC effort for the emergence of a new generation of black elected officials throughout the South in the late 1960s and early 1970s.
Some even add that SNCC's voter empowerment groundwork helped pave the way for the eventual election of the first African American president of the United States, Barack Obama.
Many of the SNCC student activists then, who have gone on to become civil rights icons in the half-century since the group's founding, will be returning to Shaw University's campus next month, not only to commemorate, but also express the continued need for diverse student activism today.
Most prominent of some of the former SNCC activists include Julian Bond, known best as a lieutenant of Dr. Martin Luther King Jr., who recently stepped down as chairman of the NAACP Trustee Board; Congressman John Lewis (D-GA), another King disciple who served as SNCC chairman in 1963; former Washington, D.C. Mayor Marion Barry, who was a founding member of SNCC representing Fisk University in Tennessee, and its first chairman; Rev. James Lawson, who delivered the first SNCC keynote address on the importance of nonviolence; Charles McDew, a student of South Carolina State University and SNCC's second chairman; and entertainer/activist Harry Belafonte, who along with other prominent actors and singers of the 1960s, was a strong supporter of SNCC, Dr. King and the civil rights movement.
Locally, Dr. David Forbes Sr., senior pastor of Christian Faith Baptist Church in Raleigh, an alumnus of Shaw University, and co-founding SNCC member, will also make a presentation at the conference about the university's role in the founding of SNCC.
Dr. Forbes currently serves as the SNCC 50th Anniversary Local Host Committee chair.
As part of the local commemoration of the SNCC 50th, a town hall meeting bringing together veterans from the 60's sit-in movement with student activists of today is being planned for April 8th at St. Augustine's College Seby B. Jones Auditorium, and a student marched is then planned for Saturday, April 10 through downtown Raleigh on Fayetteville Street.
For more information about the SNCC 50th Anniversary Conference, go to www.sncc50thanniversary.org