Van Jones Lands on His Feet After Leaving the White House 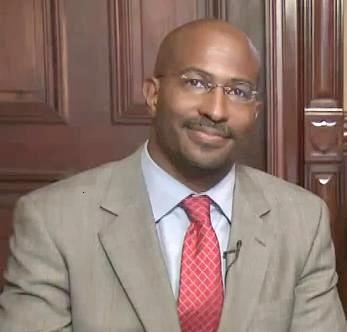 Public mistakes can sink promising political careers. Nobody can understand that better than former Obama advisor Van Jones, who had to step down from his White House position as the go-to guy on green jobs and environmental justice issues only months into his tenure. Named one of Times magazine's 100 most influential people in 2009, Jones was pilloried for signing a petition that accused the Bush administration of complicity in the 9/11 attacks – he says he didn't read the small print – and for calling Republicans a derogatory name during a lecture he gave in 2008.
But now the Yale-educated lawyer, who helped found three racial justice nonprofits – the Ella Baker Center for Human Rights, Color of Change and Green for All – and was a key advocate for the 2007 Green Jobs Act, is back on top.
Princeton University has appointed Jones to a fellowship in the Center for African American studies and the Program in Science, Technology and Environmental Policy at the Woodrow Wilson School of Public and International Affairs. The appointment is for the 2010 -11 academic year.
Jones will conduct research, host discussions and teach a class focused on how to create a green economy that helps disadvantaged people.
"For close to two decades he has been addressing the complex issues of environment, poverty, race and politics, said Eddie Glaude, the religion professor who chairs Princeton's Center for African American Studies. "His tenure at Princeton will bring to…students a nuanced understanding of these issues."
The student-run website The Daily Princetonian reports that most students support the appointment. In a March 5, article, staff writer Wonpyo Yun quotes politics Professor Melissa Harris-Lacewell, a frequent contributor to MSNBC, saying that Princeton needs to hire many more Black academics.
"I am distressed that the (Wilson School) continues to maintain such a shockingly racially homogenous faculty while touting the visiting position of a major African-American figure.
"…continued failure to diversify its faculty through commitment to full-time tenured and tenure-track African-American faculty… makes me less than enthusiastic about their extension of a brief visit to Jones."