Rangel Steps Down As Ways and Means Chairman 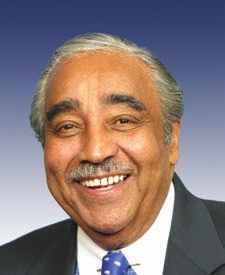 WASHINGTON (AP) -- New York Rep. Charles Rangel temporarily stepped aside as chairman of the House Ways and Means Committee Wednesday as he struggled with mounting ethics woes that left his political future uncertain at best.
Rangel's decision cheered Democrats who feared political fallout affecting their own futures, but did little to satisfy Republicans who had been seeking a formal vote bringing about his temporary removal from the chairmanship.
The 20-term congressman has played a key role in President Barack Obama's attempts to win passage of historic health care legislation, and veteran Rep. Fortney "Pete" Stark of California seemed likely to succeed him.
First elected in 1970, Rangel is among the longest-serving African-American members of Congress, ranking just behind Rep. John Conyers, D-Mich., in seniority, and he was a founding member of the Congressional Black Caucus. Rep. Barbara Lee of California, the caucus chairman, said, "We look forward to the conclusion of the investigation and to him resuming his position as chairman."
A number of questions have been raised about the 79-year-old Rangel's conduct. Ethics investigators are looking into his use of his official position to raise money for a New York college center to be named after him and his belated disclosure of at least hundreds of thousands of dollars in assets and his use of rent-controlled apartments in New York.
Republicans had been calling for Rangel to step aside since last year, and these demands multiplied after the House ethics panel last Friday released a report accusing him of violating House gift rules in connection with a series of trips he took to the Caribbean.
The panel said that he had violated standards of conduct by accepting 2007 and 2008 trips to Caribbean conferences that were financed by corporations. It said it could not prove whether Rangel knew of the corporate payments but concluded that members of his staff knew about them -- and the congressman was responsible for their actions.
For his part, Rangel said he didn't even have "constructive knowledge" of the corporate sponsorship of the trips and couldn't be held responsible for something staff members may have known but which he didn't.
His political problems were compounded by House Speaker Nancy Pelosi's promise to drain the swamp of ethics problems after Democrats took over the House -- following a 2006 campaign accusing Republicans of fostering a culture of corruption.
Rangel's decision to surrender the committee chairmanship put Stark, the senior Democrat on the panel, in position to take it over.
One top Democrat on the committee, Rep. Richard Neal of Massachusetts, said Stark would be the interim chairman of the committee. "It struck me that Mr. Stark was going to be chairman in the interim," said Neal, who said the issue was discussed at a meeting of committee Democrats Wednesday morning.
Rangel called his news conference Wednesday on short notice, telling reporters, "My chairmanship is bringing so much attention to the press, and in order to avoid my colleagues having to defend me during their elections, I have this morning sent a letter" asking that he be granted "a leave of absence until such time as the ethics committee completes its work."
Pelosi met with Rangel Tuesday night and declined to endorse his continuing on as chairman. She said Wednesday in a statement, "I commend Chairman Rangel for his decades of leadership on jobs, health care, and the most significant economic issues of the day."
Rangel has raised considerable money for fellow Democrats. His leadership political action committee raised $2.2 million in the 2008 election cycle and spent $2 million, according to the Center for Responsive Politics. He also raises money through a Rangel Victory Fund.
Republican campaign officials have started criticizing individual Democrats for holding on to chunks of campaign contributions that resulted from Rangel's fundraising.
As an example of his eroding support, Rep. Ann Kirkpatrick, D-Ariz., is giving campaign funds affiliated with Rangel to charity, her spokesman said.
The congresswoman will donate $10,000 from the National Leadership PAC and $4,000 from Rangel for Congress that was contributed in the 2008 cycle, said Joe Katz, her spokesman.
Rangel set up the Rangel Victory Fund, to raise cash for his House campaign and for the political action committee. In 2009, most of its fundraising benefited Rangel's campaign. The Rangel Victory Fund steered at least $479,000 to Rangel's House campaign and roughly $70,000 to his National Leadership PAC last year.
The National Leadership PAC directed $10,000 to Democratic congressional candidates: $2,000 to Senate candidate Michael Capuano of Massachusetts and $1,000 each to New York Sen. Kirsten Gillibrand and Reps. Jim Himes of Connecticut, Debbie Halvorson of Illinois and Gary Peters of Michigan and New York Reps. Michael McMahon, Carolyn Maloney, Dan Maffei and Eric Massa. The fund spent at least $60,000 last year on a birthday gala fundraiser Rangel held at the historic Tavern on the Green restaurant in New York.