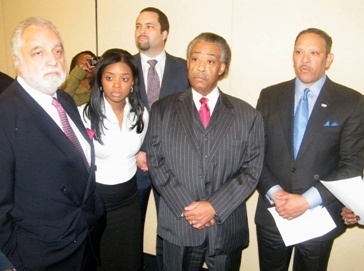 WASHINGTON (NNPA) - In a rare appearance, all in one place, a coalition of America's foremost Black organizations are aiming to assure that the 2010 census does not undercount Black people, a fiasco that could cause communities to miss out on their fair share of trillions of dollars in public resources and political representatives in Black districts.
The National Urban League, the National Action Network, the Rainbow/PUSH Coalition, the NAACP, the National Coalition on Black Civic Participation, and the National Newspaper Publishers Association, all met with Secretary of Commerce Gary Locke, his senior staff and Census Bureau representatives last week to express this concern. Afterward, they held a press conference to warn millions about what's at stake in the upcoming national head count that takes place every 10 years.
"There are those that want to act like Blacks should just be satisfied with having a Black president and the fact that four Blacks in the White House is the only count we should care about," said NAN President, the Rev. Al Sharpton. "We want every house counted."
Undercounting the Black population is only one part of the concern. National Urban League President and CEO Marc Morial suggests that there's also the possibility of an over-count of the White population, exacerbating the importance of an accurate count in the current economic climate.
"It's doubly important at this time in this nation with high unemployment, at a time in this nation with the sub-prime housing crisis, when the distribution of many, many of the federal investments to stem the tide of joblessness are determined by the information contained in the census," said Morial.
Commerce Secretary Locke acknowledges that undercounting Black people has been a historic problem.
"African-Americans and other minority communities have [been] consistently under-counted in past censuses. So we're grateful to the respected leaders we met with for their commitment to achieving an accurate count," said Locke in a statement issued after the Dec. 16 meeting. "The ongoing conversation we continued today will be valuable as Census Day approaches and we progress toward our goal of ensuring that every U.S. resident is accurately counted."
What's at stake is the allocation of more than $3 trillion in federal funding for local and state agencies and programs over the next decade. The count also determines the number of congressional seats a state has.
In 2000, the national undercount was 0.1 percent, but the Black under-count was 2.8 percent, according to statistics cited by Morial. Fewer than 60 percent of African-Americans returned their 2000 Census questionnaire compared to 77.5 percent of Whites, according to the Census Bureau.
This time could be different.
"We have the opportunity to have the best census count that we've ever had. That's the possibility," said Ben Jealous, NAACP president and CEO. "If we can get the national undercount to 0.1 percent we can do the same thing in the Black community."
Starting April 1, as many as 145 million households will start receiving questionnaires mailed out by the Census Bureau. But several key factors will determine whether those questionnaires get returned, including the level of awareness of what the census is and why the counting is so crucial.
A primary concern among Black leaders is that the Census Bureau is not giving Black organizations the needed level of support to get the word out about the upcoming count. For instance, the Bureau's paid media advertising budget to get the word out about the impending count appears inadequate. Less than $3 million is planned to be allocated to the nation's Black print media outlets, a budget amount that Black newspaper publisher Danny Bakewell said is "meager".
"I am very discouraged by the plan that is presently in place," said Bakewell, publisher of the Los Angeles Sentinel and chairman of the National Newspapers Publishers Association, a federation of more than 200 Black-owned newspapers and media partners around the country.
"We are asking for reciprocity," Bakewell said. "We are not asking for a handout; nor a bailout. We are asking for an accurate count."
There is also a continuing concern about how America's incarcerated citizens are counted due to the large number of African-Americans in America's prisons and jails. Prisoners are currently counted as residents in the area where the prison or jail is located instead of the community from which they came.
"There's nothing more illegal right now than citizens who are imprisoned losing their citizenship count because they are located where they can't live outside of the walls," said the Rev. Jesse Jackson, president and founder of the Rainbow/PUSH Coalition. "They are counted inside the walls."
The leaders vowed to keep pressure on for an accurate count as the census is only three months away. There's just too much at stake, says Sharpton: "We cannot have some over-counted and our community under-counted and we are already minorities. It's a double whammy that we must correct in 2010.