OSLO – Newly enshrined among the world's great peacemakers, President Barack Obama offered a striking defense of war. Eleven months into his presidency, a fresh Obama doctrine. Evil must be vigorously opposed, he declared as he accepted the Nobel Peace Prize on Thursday. At the 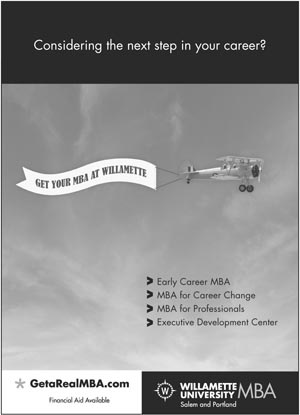 same time, he made an impassioned case for building a "just and lasting peace."
"I face the world as it is, and cannot stand idle in the face of threats to the American people," Obama told his audience in Oslo's soaring City Hall. "For make no mistake: Evil does exist in the world."
Pronouncing himself humbled by such an honor so early in "my labors on the world stage," Obama nevertheless turned his Nobel moment into an unapologetic defense of armed intervention in times of self defense or moral necessity. The hawkish message was an inevitable nod to the controversy defining his selection: an American president, lauded for peace just as he escalates the long, costly war in Afghanistan.
It was a jarring moment when Obama, in the midst of the ceremony, said of his troops in Afghanistan: "Some will kill. Some will be killed."
He lauded Mohandas Gandhi and Martin Luther King Jr., preachers of nonviolent action. But he added, "A nonviolent movement could not have halted Hitler's armies. Negotiations cannot convince al-Qaida's leaders to lay down their arms."
"To say that force is sometimes necessary is not a call to cynicism, it is a recognition of history."
The president laid out circumstances in which war is justified — in self-defense, to come to the aid of an invaded nation, on humanitarian grounds such as when civilians are slaughtered by their own government. 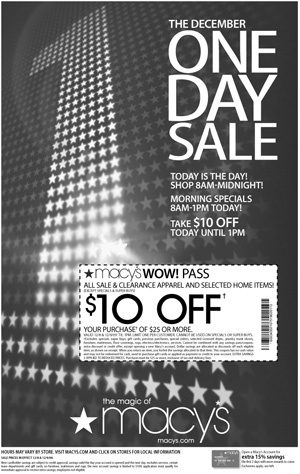 At the same time, he also stressed a need to fight war according to "rules of conduct" that reject torture, the murder of innocents and other atrocities.
"We lose ourselves when we compromise the very ideals that we fight to defend," he said. "And we honor those ideals by upholding them not when it's easy, but when it is hard."
He emphasized a need to exhaust alternatives to violence, including worldwide sanctions with teeth to confront nations such as Iran or North Korea that defy international demands. He pushed himself away from George W. Bush in defending diplomatic outreach that engages even enemies. He defined peace as civil rights, free speech and economic opportunity, not just the absence of conflict.
"Let us reach for the world that ought to be," Obama said. "We can understand that there will be war, and still strive for peace."
Back in the U.S., presidential historians and foreign policy specialists saw the speech as underscoring Obama's revamping of America's stance — away from confrontation and toward cooperation and negotiation when possible, and military action when unavoidable.
Zbigniew Brzezinski, who was President Jimmy Carter's national security adviser, said Obama had presented "a very broadly stated case that we cannot in all circumstances avoid war." But he said he would have liked to have heard "some greater clarification of how he will pursue the broad objectives he has articulated."
Obama showed "a sense of daring" in talking about war as he was honored as a man of peace, said John Baick, professor of history at Western New England College in Springfield, Mass. "He bared his soul, said we were going to have to kill, have to send soldiers to die, we hope we're 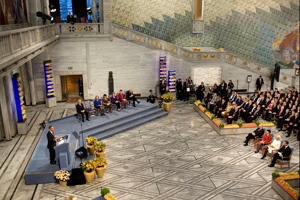 doing the right thing," Baick said.
The centerpiece of Obama's swift trip to Europe, the speech doubled the length of his inaugural address. Appearing tired here, Obama had worked all the way through the night on the flight to Norway, an aide said.
Such is the weight of he prize. Suddenly and forever, Obama is in the company of King, Nelson Mandela, Mother Teresa, the Dalai Lama.
He drew laughter from his hosts when he acknowledged "the considerable controversy that your generous decision has generated."
"My accomplishments are slight," Obama said, by comparison to such "giants of history." In addition to other Nobel winners, he said the unrecognized masses who fight for peace are "far more deserving."
Obama's wife, first lady Michelle Obama, listened to her husband's words and showed tears by the end. The president was accompanied by a small crew of family, friends and advisers.
Politically, the White House was careful not to play up Obama's big award, what with so many families hurting economically at home and more troops heading off to war. Quite a few Norwegians were said to be miffed that he stayed but a day, not the usual three, and skipped a number of traditional events.
Still there was ceremony aplenty.
Before an evening banquet with Norwegian royalty, the Obamas stepped onto their hotel balcony to wave to a crowd of thousands who had gathered for a torchlight procession. In the square below, there were chants of "Yes, we can" and "O-ba-ma" as scores of torches were held aloft. Nearby, up to 2,000 demonstrators protested, many carrying banners demanding the U.S. get out of Afghanistan.
Obama capped his evening with a sentimental toast at a candlelit dinner with Norwegian dignitaries, paying tribute to the influence of his late mother and the "largeness of her heart." And he spoke hopefully of the "extraordinary power" of the Nobel Prize to lift up those who might otherwise be forgotten.
Earlier, on a damp and chilly day, the reaction on the streets of Oslo seemed curious but not overly excited. Crowds were not nearly of the size Obama has seen elsewhere. And there were protests.
When Obama pulled up to the prime minister's office, black-hooded anti-war demonstrators banged drums and chanted slogans such as: "The Afghan people are paying the price." 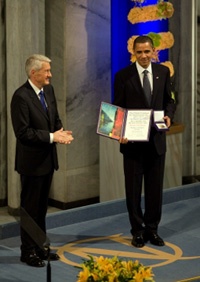 The president will return to Europe next week to speak at the international conference on climate change, and activists pushing for a serious global climate deal challenged Obama to earn his award.
He won it, in the eyes of the Nobel committee, for changing the U.S. approach toward the world. The panel cited his efforts on nuclear disarmament, climate change and diplomacy.
"President Obama is a political leader who understands that even the mightiest are vulnerable when they stand alone," the committee chairman, Thorbjorn Jagland, said Thursday.
In every stop of Obama's Oslo tour, war shadowed peace.
The president who is sending 30,000 more troops to Afghanistan made clear in a brief news conference that when troops begin coming home in July 2011, the pace will not be fast.
It was the latest, sober warning that the United States will be at war for years.
As for the other criticism of Obama's award — it was just plain premature for a leader not quite 11 months on the job — the president said to track his results. He said he wants to advance America's international interests and fix its economy, not win an award.
"If I'm successful in those tasks, then hopefully some of the criticism will subside," he said. "But that's not really my concern."
The Nobel comes with a $1.4 million prize. The White House says Obama will give that to charities but has not yet decided which ones.