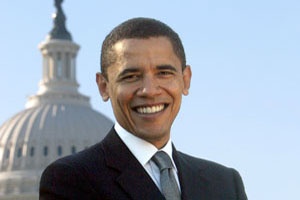 WASHINGTON – A beaming President Barack Obama said Friday he was both honored and humbled to win the Nobel Peace Prize and would accept it as a "call to action" to work with other nations to solve the world's most pressing problems.
Obama told reporters in the White House Rose Garden that he wasn't sure he had done enough to earn the award, or deserved to be in the company of the "transformative figures" who had won it before him.
But, he said, "I will accept this award as a call to action, a call for all nations to confront the challenges of the 21st century."
Obama will travel to Oslo, Norway, in December to accept the award.
Obama, 48, is the third U.S. president to win the prize while in office, after Theodore Roosevelt and Woodrow Wilson. Former President Jimmy Carter won the prize in 2002, more than two decades after he left office.
In its surprise choice, the Norwegian Nobel Committee cited the president's creation of a "new climate in international politics" and his work on nuclear disarmament, even though he is just nine months into his presidency.
"These challenges cannot be met by any one leader or any one nation," the president said. "That's why my administration wants to establish a new era of engagement in which all nations must take responsibility for the world we seek."
Obama acknowledged that, while accepting an award for peace, he was commander in chief of a country engaged in wars in Iraq and Afghanistan.
"We have to confront the world as we know it," he said.
He said he was working to end the war in Iraq and "to confront a ruthless adversary that directly threatens the American people and our allies" in Afghanistan.
"I'm also aware that we are dealing with the impact of a global economic crisis that has left millions of Americans looking for work," he said.
"This award must be shared by everyone who strives for justice and dignity," he added.
He said that some of his goals, including that of a nuclear-weapons-free world, might not be accomplished in his lifetime.
"I am both surprised and deeply humbled by the decision of the Nobel Committee," Obama said.
"Let me be clear, I do not view it as a recognition of my own accomplishments, but rather as an affirmation of American leadership on behalf of aspirations held by people in all nations."
Obama said he was aware that "throughout history, the Nobel Peace Prize has not just been used to honor specific achievement, it's also been used as a means to give momentum to a set of causes."
The award took the Obama and his staff by surprise. Press secretary Robert Gibbs learned from reporters that Obama had won the 2009 prize, and telephoned the White House early Friday to pass along the news to his boss.
"Well, this is not how I expected to wake up this morning," Obama said. He described his interaction with his two daughters.
"After I received the news, Malia walked in and said, 'Daddy, you won the Nobel Peace Prize, and it is Bo's birthday.' And then Sasha added, 'Plus, we have a three-day weekend coming up.' So it's — it's good to have kids to keep things in perspective."