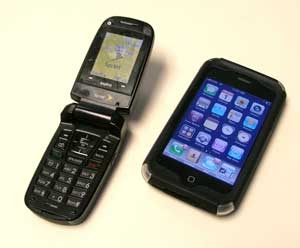 Despite an oft-circulated email warning of an impending onslaught of telemarketing calls to your cell phone, the Federal Communications Commission says the claim is false.
Since about 2004, emails have been circulated – usually by good-hearted friends and family – that say cell phone numbers are about to go public, and unless you sign up to the federal Do Not Call Registry, you will likely have to pay for all the calls of telemarketers that will soon be filling your incoming call lists. The email also says the registry will take your cell phone off of telemarketers' lists for the next five years.
All of these claims are utterly false. So don't panic.
According to the FCC, even if a list of cell phone numbers went "public" – which they aren't -- you'd be unlikely to get any calls from telemarketers. It is illegal for telemarketers to use automated dialers for cell phone numbers and the commission says these dialers are standard for the industry. Autodialers enter and dial a new number the second the last call ends.
The Do Not Call Registry is also a registry for life, not five years. Once you've signed your number on the list, telemarketers are forever banned from calling it. Many people signed up for the list when it went live in 2003. By 2007, there were more than 139 million numbers on the list.
There's also not any deadline for signing up. If you haven't signed up and you get a call from a telemarketer, simply sign up after the call and it will prevent any more telemarketers from calling.
According to snopes.com – a fact finding website – the email rumor began when telecommunications companies attempted to assemble a 411 directory of cell phone numbers. As more and more people turned to cell phones as their primary auditory communication device, companies thought it wise to start including these numbers in their directories. The 411 directory was an "opt-in" directory, meaning you had to give permission for your number to be included. The directory was never to be given to telemarketing companies.
The number for the Do Not Call Registry on most emails is real (1-888-382-1222) and the website is www.donotcall.gov.