Legalized Pot: The Key to Our Budget Crisis? 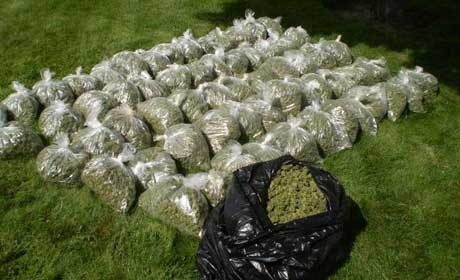 SAN FRANCISCO (AP) -- Pot advocates started their push Friday to get a marijuana legalization measure on California's 2010 ballot with backing from a prominent state politician. Activists in Oregon are also circulating petitions to legalize, regulate and tax recreational and industrial cannabis.
Former state Senate president Don Perata announced his support for the Tax Cannabis 2010 campaign, which began gathering signatures for the proposal at the annual meeting of the National Organization for the Reform of Marijuana Laws.
Supporters need nearly 434,000 signatures to make the November 2010 ballot.
Though Perata did not appear as scheduled at a news conference launching the signature drive, he said in a statement that taxing legal marijuana was key to easing California's financial woes.
"In this time of economic uncertainty, it's time we thought outside the box and brought in revenue we need to restore the California dream," he said.
Term limits forced Perata from the Legislature in 2008. He announced in March that he planned to run next year for mayor of Oakland, where voters in July overwhelmingly passed a first-of-its-kind tax on city medical marijuana dispensaries.
Pot dispensary owners who supported the tax as a way to show their commitment to the city included Richard Lee, the ballot measure's main backer.
Under the proposal, adults 21 and older could legally possess up to an ounce of pot. Homeowners could grow limited amounts, and local governments would decide whether to allow pot sales.
Supporters argue taxes levied on marijuana sales could help strapped cities weather revenue shortfalls caused by the recession and California's budget crisis.
Lee said he believed the cost of obtaining the needed signatures would run about a dollar per name.
"We've raised a good portion of the amount that we need, so we feel real confident that we're going to get it on the ballot," he said.
The measure is the most conservative of three pot legalization proposals certified for signature-gathering by California's Secretary of State.
A group of Northern California criminal defense lawyers is promoting a measure that would set no specific limits on the amount of pot adults could possess or grow for personal use.
The measure would repeal all local and state marijuana laws and clear the criminal record of anyone convicted of a pot-related offense.
The third measure, proposed by a Long Beach pot activist, would repeal state marijuana prohibitions and give the Legislature a year to adopt new laws regulating and taxing the drug.
The state Legislative Analyst's Office said all three measures could bring potentially major new revenue to the state from taxing marijuana. The office also predicts the measures would result in tens of millions of dollars in savings of law enforcement costs to state and local governments.
The cost of running California ballot measure campaigns often climbs to eight figures, so supporters of the pot initiatives will need to focus on fundraising.
Some pot activists believe it's too soon to reach for full-fledged marijuana legalization, a goal the pro-marijuana movement has worked toward for decades.
Backers of the measures hope to tap into what they see as pro-legalization momentum spurred in part by the Obama administration's hands-off attitude toward states that allow medical marijuana.
If any of the proposals do make the ballot, a Field Poll earlier this year found that a slight majority of state voters supported legalizing and taxing pot.
Mark Kleiman, a professor of public policy at the University of California, Los Angeles, who specializes in drug issues, said he believes Californians may be ready to lift the ban.
"I wouldn't be stunned. I could see it going either way," he said.

Proposed Law in Oregon
As each year's marijuana harvest moves from clandestine grow sites to sellers and users, police continue to confiscate hundreds of pounds throughout the United States, leading to nearly 800,000 arrests every year for simple possession. As this continues, the state of Oregon continues to miss out on millions of dollars from the state's number one, albeit illegal, cash crop.

Although those who grow, sell and use marijuana are currently violating federal and some state laws, members of the reform community say that doesn't have to be the case. They look to data that shows marijuana to be a safer alternative to alcohol , that the prohibition on marijuana has failed and say the laws do more harm to society than the actual drug.

In Oregon, volunteers are currently circulating a petition that would tax and regulate marijuana for adult use. The Oregon Cannabis Tax Act 2010 aims to end the black market control of cannabis and place it in adult only stores, accessible by only those people 21 and older. The Act would also attempt to restore the industrial hemp industry, which can be used to make a variety of substances – from food products to paper to building materials. Currently, companies using hemp must import the fibers or sterilized seeds, as the Drug Enforcement Administration does not allow farmers in the United States to grow the non-psychoactive plant.

So The Skanner can bring you the most up-to-date and informed coverage of drug policy, use and addiction, Reporter Brian Stimson will be traveling to Chicago in October to attend the Addiction Studies Program for Journalists Conference, put on by the Wake Forest University School of Medicine. Stimson won a scholarship to the two-day conference, which features a variety of speakers and experts on addiction.