Omarosa: The 'Life After' Interview

By Kam Williams, Special to The Skanner
Published: 03 September 2009 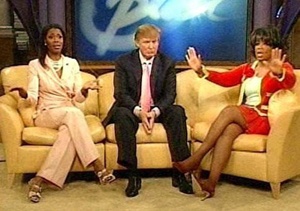 Omaroseonee Manigault-Stallworth was born on Feb. 15, 1974 in Youngstown, Ohio where she attended Rayen High School before earning her Bachelor's degree in Broadcast Journalism at Central State University. She later moved to Washington, D.C. to pursue both a Master's and Ph.D. in Communications at Howard University. She later served as Deputy Associate Director of Presidential Personnel at the White House under President Bill Clinton, although her subsequent appearance on a television show would come to eclipse all of the above.
That's why you probably know her from "The Apprentice" as just Omarosa, the diva with the world-class attitude. The statuesque beauty was recently crowned the #1 Reality-Show Villain of All Time by TV Guide. This was no mean feat, when you consider that she had to beat out some rather reprehensible characters for the title, such as pathological liar Johnny Fairplay from "Survivor" and wife beater Jonathan Baker from "The Amazing Race."
Omarosa only has herself to blame, having cultivated a bad girl image on "The Apprentice" with lines like, "I'm going to crush my competition and I'm going to enjoy doing it." Still, in no way does that TV persona matches the humble and charming real-life Omarosa whose greatest passion is working with at-risk youth and the homeless. Dedicating most of her free time to community service, she has volunteered her time to the Maya Angelou Public Charter School, in D.C., and to the Positive Vibrations Program and the Fred Jordan Mission in L.A. Furthermore, she serves as a celebrity goodwill ambassador for the Haitian Support Program and is currently enrolled in Divinity School.
Here, Omarosa talks about all of the above and about her appearing on "Life After," a new series premiering on TV-One in September. The show features interviews with celebrities about the effects of

transformational events on their lives.

Kam Williams: Hi Omarosa, I don't know if you remember me, but we met in May at the African American Pavilion in New York. I approached you for an interview, but you gave me a business card with a bogus email address.
Omarosa Manigault: I'm sorry. I didn't know that they had printed the wrong email address on it. I got home, and I was like, "Why would yawl send these cards with me?"
KW: Well, I did manage to track you down again for this interview anyway. So, what interested you in this new TV series, "Life After?"