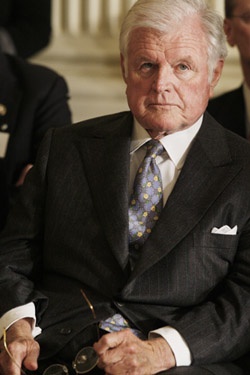 One of the longest serving and most influential senators has died. The family of Edward Kennedy announced the lawmaker died Tuesday night from brain cancer.
Colleagues and friends of Kennedy lamented his passing, including Oregon Rep. Earl Blumenauer.
"We have lost one of the greatest senators of our time. Ted Kennedy is someone who not only fought injustice, but made real strides in advancing women's rights, defending the environment, and protecting minorities," Blumenauer said. "He not only believed in change, but he achieved it, improving the lives of people the world over."
Although he did not live long enough to see the vote, one of Kennedy's longtime aspirations was to see a health care system that covered every American.
Presidet Obama interrupted his vacation in Martha's Vineyard Wednesday to honor the last remaining member of one of the country's best-known political dynasties.
The last "liberal lion" of the senate will be interred at Arlington National Cemetery, close to his brothers, John and Robert.