Saeed Shabazz Special to the NNPA from the Final Call
Published: 16 August 2009 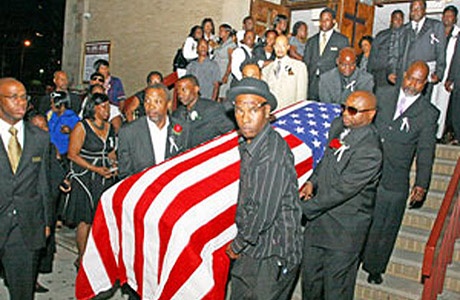 NEW YORK (NNPA) - The public may never know if Shem Walker, 49, knew that the man he scuffled with on his mother's steps one evening in mid-July was an undercover narcotics officer.
The officer was using the stoop to monitor a "buy-n-bust" operation a few doors away from the Walker home. What happened may never be known because Shem Walker is dead.
The New York Police Department and some witnesses say the men scuffled after Walker told the man in plainclothes to move on. Somehow the officer's weapon fired and a 15-year Army veteran died defending his mother's home, something he had done many times before in an area known for drug trafficking.
As of Aug. 7, nearly a month after the fatal encounter, police officials hadn't identified the undercover officer involved, referring the incident to the Brooklyn District Attorney's office. Police officials have refused comment on the pending investigation.
"The reality is that this man was protecting his mother's property. He was sort of the mayor in the community; he was trying to clean up the neighborhood," Brooklyn Councilwoman Letitia James told The Final Call, while standing outside of the Brooklyn District Attorney's office a few days after the shooting.
Councilwoman James said people are asking her as an elected official why these types of incidents "only happen in certain areas."
The death of Shem Walker is one of many connected with undercover officers and encounters with civilians, encounters between Black undercover cops and their White counterparts and Black officers shot while out of uniform.
The incidents can be found north, south, east and west.
• On New Year's Day 2009, in New Orleans, nine undercover officers shot and killed Adolph Grimes III, 22, a man with no criminal record. Shot at 14 times, Grimes died with 12 rounds hitting him in the back.
• In Jacksonville, Fla., Isaac Singletary, 80, died in 2007 at the hands of undercover officers conducting a buy-n-bust on his front lawn. Singletary confronted the officers with his rifle, according to reports, thinking they were drug dealers. The confrontation cost him his life.
• In 2004, undercover narcotics officers drew their guns on Rudolfo "Rudy" Cardenas, 43, in San Jose, Calif. According to reports, he thought they wanted to rob him; he ran. They chased him and he ended up shot multiple times in the back.
• A Black undercover officer in Oakland, Calif., was killed by two uniformed officers as he trained his gun on a car theft suspect.
• In December 1992, five White officers beat a Black undercover officer they had stopped for a traffic violation in Nashville, Tenn.
"The disproportionate impact of policing in the Black and Latino communities is a conscious effort to criminalize large numbers of youth. There are no jobs, so there becomes a profit motive in introducing drugs in these communities, then saying we have to focus on these neighborhoods; and then policing these communities, using undercover police who appear to be of the criminal element to draw unsuspecting people to them," said Carl Dix, a national spokesman for the Revolutionary Communist Party and anti-police brutality activist.
"Look at the cases of Walker in New York and Singletary in Florida, they react to people who are on their property, who turn out to be undercover cops; and they both lose their lives protecting that property. It is the use of undercover policing that causes many of these hostile confrontations. And somebody who says this is a necessary byproduct of fighting crime is saying it is okay to marginalize Black and Latino communities," he said.
The October 22 Coalition Against Police Brutality, New York chapter, says at least 166 people have been killed by NYPD since the fatal shooting of Muslim immigrant Amadou Diallo in 1999 by three White undercover officers. The 2006 fatal shooting of Sean Bell by undercover NYPD officers, who fired 50 shots at his car, sparked outrage across the country. Possible federal charges against three officers in the Bell shooting are pending and departmental action is in limbo. The officers effectively remain on desk duty.
"The main issue we find is not if undercover policing is necessary or required, the issue is that these officers are properly trained and prepared for the assignment," said attorney Michael Hardy, of the National Action Network.
The Federal Bureau of Investigation reports 22 police officers have been killed nationally by accidental shootings—such as caught in crossfire, friendly fire or mistaken identity—in the past decade. FBI stats do not mention the race of police officers involved.
The October 22 Coalition reports at least 239 people in the New York, New Jersey area have been killed by law enforcement since Sept. 11, 2001. These statistics, however, do not identify who was killed by officers working undercover.
"Lack of proper training and racial profiling, obviously these two things have been a problem; and we see that in the case of police officer Omar Edwards, and the Shem Walker case—racism is definitely part of the difficulty, but with Walker, that was a Black officer, so we say look at attitude when you pick officers for these operations," said Hardy. Omar Edwards was an off-duty Black officer killed in May after chasing a man who allegedly broke into his car. Undercover officers maintain Edwards turned toward them with his weapon drawn.
"We would like to see a residency requirement for the NYPD and a return to real community policing. Policing has to be something that is joined with the needs of the community," Hardy added.

Black police association: Problem is 25 years old
"We have been looking at this issue for a long time," said Ron Hampton, spokesman for the Washington-based National Black Police Association. "When I say, awhile, I am talking about for the past 25 years; the NBPA has had the undercover policing issue on our radar screen. It was reported in Ebony magazine and Black Enterprise did a story about how Black undercovers were being beaten and shot at," said Hampton.
His organization has case files of members who were beaten by other officers while screaming that they were cops.
Noel Leader, spokesman for the New York-based 100 Blacks in Law Enforcement Who Care, said his organization has a "lot of issues" with the way undercover operations are run and disproportionate targeting of the Black community.
"Fifteen years ago we had members that asked how they could go about not being approved for undercover units. Since then we encourage our members not to take the undercover assignments that might put them at risk," Leader told The Final Call.
"The department has been getting around our instruction by offering to Black officers who are not members of our group the opportunity to become a detective if they take undercover assignments. They are taking the rookies right out of the academy, who don't know the streets, or the NYPD," Leader said.
Prof. Tom Nolan, associate professor of criminal justice at Boston University and a former police officer, admitted in an email that "undoubtedly undercover police work exposes Black citizens to the potential for dangerous encounters with the police; and further poses extreme hazard for Black undercover officers at the hands of their fellow officers."
Prof. Eugene O'Donnell, professor of law and police studies at the John Jay College of Criminal Justice in Brooklyn, in an email noted "in the final analysis, police enforcement is a political question" and "an overwhelming expectation of the people is that they want the police to tackle crime and disorder aggressively."

Politicians urged to take strong action
Councilwoman James and some of city council colleagues say aggressive policing may be necessary, but there are many complaints from the community about police misconduct. James and 11 other council members introduced a bill that would amend the city charter and authorize the Civilian Complaint Review Board to prosecute cases of police misconduct.
Under present law, the board can only recommend officers who should be disciplined to the NYPD.
"The politicians must show some guts and monitor law enforcement policies, and until they are willing to do that, nothing will change on the street," argued Damon Jones, NBPA representative in Westchester, N.Y. "The whole institution of policing needs to be changed," he said.
Dr. Jon M. Shane, professor of criminal justice at the John Jay College, told The Final Call while there is some collateral damage attached to undercover operations, "the need for undercover work in general is fueled by criminal activity that is impenetrable without first gaining the confidence of the criminal players."
"I do not have any data on whether undercover work disproportionately focuses on the Black community," the professor said. "However, undercover work, like most police work generally follows crime patterns and community complaints."
De Lacy Davis, a former police sergeant on the East Orange, New Jersey police force, and founder of the Newark-based Black Cops Against Police Brutality (B-COPS), refuses to buy into the collateral damage or operation snafu arguments.
"Black and Latino people die at the hands of police departments disproportionately because of the culture of racism that permeates these departments nationally," he said. "And some of the problem comes from the culture of arrogance that is also part of the undercover policeman's demeanor."
"It happens because society sees Black people as a problem," said Hampton.
In Philadelphia, Black police officers are taking the issue of White racism displayed by fellow officers head on. The Guardian Civic League, an organization representing Black officers, filed a lawsuit July 16, charging on-duty White officers posted derogatory remarks against Blacks on a website.
"You cannot go much more undercover than a website where you can say these things without showing yourself," Rochelle Bilal told The Final Call. "The depth of the racism displayed on this Web site gives rise to how these officers can properly execute their duty to protect the people they openly despise," she said.
Hampton and Leader said an immediate remedy is to severely punish officers who flout the law. "The only way to put a stop to these undercover shootings is by sending people to jail and imposing heavy fines on them," said Leader. "There has to be vigorous enforcement of the rules and regulations that exist on how undercover officers are to conduct themselves."
"I agree, there must be some stiffer consequences for violating the rules of engagement that lead so often to the death of a Black civilian or Black police officer," said Hampton.
Activists are tired of hearing more training is needed, he added. "The departments where the problem exists most, Los Angeles, New York City and Washington, D.C., are probably over-trained. So, either something is missing from the training, or we just need to lock the bad cops up and throw away the key," he said.
The National Black Police Association is also proposing a national discussion on law enforcement and race, in light of the arrest of Harvard Prof. Henry Gates, in his home, and the killing of Shem Walker. "We need to have this national discussion now, not later," insisted Hampton.
He warned, "We need to come up with some real solutions, or we will be burying the next one."